Margaret the First by Danielle Dutton 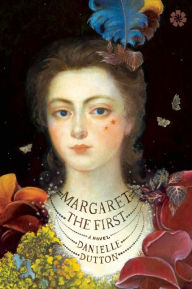 Margaret the First was not a queen, but an original at a time when women usually were not recognized. Danielle Dutton writes experimental historical fiction to dramatize the life of Margaret Cavendish, Duchess of Newcastle.

Born Margaret Lucas, she was the youngest of eight children, a girl who loved books, and celebrated her own fantasy world. And, she found her own way in life, asking to join the Queen's court. However, as a Royalist, that meant she spent years in exile in France and then Antwerp when Cromwell took power. The quiet young woman spent time reading and thinking, but was not appreciated at court until William Cavendish showed up there, a marquess thirty years her senior. Her marriage to him meant she had someone to talk to, to write with, someone who was a patron of the arts and sciences, and had salons wherever he lived. Those salons and the men they attracted allowed Margaret's thoughts to run wild as she listened to, and occasionally, took part in intellectual conversations.

Dutton incorporates Margaret's own writing to experiment with the style of this novel. At times it's rambling as Margaret sorts out her poems and her thoughts. While on the continent, she did something almost unheard of for a woman. She published a book, followed by a second one. But, once she and William moved back to England following the Restoration, her writing and her unusual outfits caused her to be called "Mad Madge" in the streets. However, she wrote poems, plays, science fiction, and was invited to a meeting of the Royal Society, the last woman to be invited for two hundred years.

Parts of Dutton's book worked for me, and parts didn't. Unfortunately, I'm a philistine, and I appreciated the historical details much more than Margaret's own writing. The details of the everyday life, the medical conditions, the historical aspects were much more interesting. I would have preferred a straight historical novel or biography. The poetry and writing, the experimental angle, was lost on me.

Margaret the First, a fascinating woman in the 17th century, is Danielle Dutton's focus. Those who appreciate experimental literature will appreciate the book more than I did.

I think this would appeal to the Dulcie Schwartz in me - thanks for the head's up!