love in lowercase by Francesc Miralles 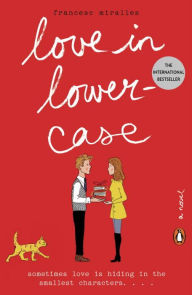 Francesc Miralles' love in lowercase is an international bestseller with an interesting premise. Unfortunately, I liked the premise a little more than the book itself. Perhaps it's because I bogged down on the German literature, not the plot of the book itself.

At thirty-seven, Samuel de Juan is an assistant lecturer in the Department of German Studies and Linguistics at a university in Barcelona. He's a lonely man, feeling alone and vulnerable during the Christmas and New Year holidays. He comments that "I'm already in the new year. But there's nothing new about it." However, the new year is about to change for Samuel, and the change starts at his apartment door. A young tabby cat shows up at his door. He calls the cat Mishima, and that cat changes everything about Samuel's life.

Thanks to following Mishima, and tending to the cat, Samuel talks to the man upstairs, a man he's seen for six years, but never knew. He gets to know a vet, runs into a woman who he loved at the age of six. And, Samuel's life continues to change, just because he let a cat in the door.

What's love in lowercase? "It's when some small act of kindness sets off a chain of events that comes around again in the form of multiplied love. Then, even if you want to return to where you started, it's too late, because this love in lowercase has wiped away all traces of the path back to where you were before." Beautiful thought, isn't it? If Miralles had stuck with this premise and Samuel's course of change, I would have appreciated it more. Instead, as a lecturer, Samuel de Juan spent too much time discussing his lectures and German authors.

However, this is my fault, not a fault of the book itself. All of Miralles' story worked together, with the unusual characters and odd philosophies. Love in lowercase was just a little beyond me.

I couldn't get into this one, either, Lesa. I really wanted to like it, but it just fell flat for me.

I'm on page 58 of 224. Find it quirky and easy to read in spurts (lunch hour!), so not a page-turner but not bad either. Was hoping it might prove to be a good, lighter fit for a book discussion where our novels occur in other countries. Sounds like I should keep searching.

I have another one, Gloria, that might fit. Reading it this weekend. I'll let you know.

I think it sounds like it might be fun light reading. I enjoyed reading the review besides your slight hesitancy regarding the—structure?

Thanks for reviewing this book. I'd had my eye on it.