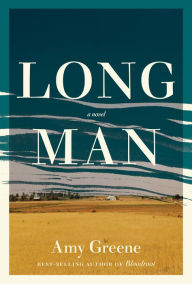 There are library customers who tell us they like our summer reading program because it challenges them to read books they wouldn't normally pick. I feel the same way about the book club I attend monthly. I never would have selected Amy Greene's Long Man, and I would have missed a beautifully written, evocative story.

In the summer of 1936, the Tennessee Valley Authority is getting ready to flood the Tennessee valley that was home to a small community. They had built a dam and bought out or moved most of the residents of Yuneetah. Even though her husband, James, has a job in Detroit where's he eager to make a better life for his small family, Annie Clyde Dodson is the sole holdout. She wants to pass the family land, as worn as it is, on to her daughter, Gracie. The TVA doesn't scare Annie Clyde. But, when three-year-old Gracie disappears one day, Annie Clyde is terrified.

And, she knows just who to blame when Sheriff Ellard Moody shows up. Amos, adopted son of the mountain midwife, Beulah, is a wanderer, a man who has traveled the country, working on roads, working on farms, stirring up trouble. Every time Amos returns to Yuneetah, there's trouble. And, Annie Clyde had found Amos in her corn field talking to Gracie before her daughter disappeared.

Greene doesn't introduce a large cast of characters, but each person is a strong individual in this powerful story of three frightening days in the life of a mother, father, and their small support network. Most of the people in Yuneetah have already moved on, and the sheriff feels the lack of townspeople who would care about the missing girl. Now, he just faces bureaucracy when he asks for help.

There are so many elements to this story of a lost community. The reader sees that the struggle for survival during the Depression and the years of flood have aged so many people before their time. Annie Clyde's aunt, Silver, a mountain woman, appears much older than her forty-four years, as does Amos. It was a tough time and a life that killed people early, as Greene shows in her stories of Annie Clyde and James' families.

The book may be a little more descriptive than I normally care to read. But, Greene's book is a powerful story of desperate lives, and the changes forced on one unwilling community, as shown through the life of one family.

I feel the same in that I might not have looked at this book if I hadn't read about it here. The story pieces that interest me are about the community and individual struggle. The different ways people react to life changing events is a favorite topic for me, especially in the face of purposeful community destruction where people have advance warning. In this case it's the TVA killing the town.

I first became interested in the somewhat unusual circumstance of having your town destroyed and your community dispersed. Sometimes such towns are moved like one in an area where I used to live in California. Before I lived there, and I'm pretty sure before I was born, the town of Kernville was moved out of the valley and up hill. The graveyard was moved as well. Bakersfield needed water, and that was that. A dam was built and valley was flooded. Lake Isabella was formed, and a new town grew by the edge of the lake.

The people stayed in the area and maintained a support system that you don't often see except in communities like Kernville and the other small towns settled areas in the valley. Kernville was small. It’s still small. It has a fascinating history old west history. I have a very small ranch that I inherited in the nearby hills. So I feel connected still. I’m glad that I can go back to visit and it is still there with many of the ranchers and descendants of the old ranching families still there.

Some things, important to the residents were left behind. When the water level goes down, usually because more water is needed down Kern Canyon, you can see the tops of the trees that lined the main street. People who were alive and lived in old Kernville would become reflective like the woman I knew who was a child then. She showed me the rocks where the cowboys would swim in the river and play with the children. She said that they would pick the children up and jump into the water with them in their arms. That ended when the dam was built.

It was a mystery by Lee Harris, Reine, that first introduced me to the story of flooding towns purposely. Until then, I hadn't realized it had happened. It was sad to read about it in Long Man. But, the fact that you actually knew one of those communities so well is fascinating.

Lesa, here is another example of the destruction of a town involving water and land rights.

The Los Angeles Aqueduct was built to deliver water from The Owens Valley up north to Los Angeles down south. This was pushed through when it was learned that ranchers, farmers, and others in the community were attempting to get federal funding for a reclamation project. The local community wanted to irrigate the area with the Owens River. Through deceptive tactics, bribery and political connections, the special-interest leaders of Los Angeles got enough land including water rights in the Owens Valley and thereby could prevent the community in the Owens Valley from reclaiming the water for their farms, ranches, and tourist business around Owens Lake. The community had a thriving tourist business that even included a steamboat on the lake.

Long after the valley was turned to dust, I lived south of there, many miles down Highway 14 in the Ridgecrest/China Lake area. During certain times of the year winds would come up, often hurricane force, and would cause a great deal of damage to property and lives on the highways that still exist. There are visibility problems on the roads. Valley Fever spores are released with the sand, among many other problems caused by the blowing dust and sand of drained Owens Lake and river water diverted from the area to Los Angeles. One trip to Los Angeles where you would see people hosing down the sidewalks and driveways, as well as overwatering lawns and trees, can be upsetting.

Over the years the aqueduct has been bombed, and people have been killed. The community was murdered.

Oh, Reine. It does sound as if a community was murdered. How tragic.