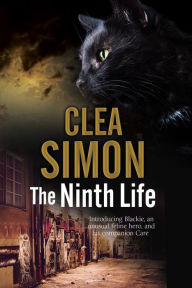 Some of you may have seen reviews of Clea Simon's books here. Sandie Herron and I have both reviewed her books over the years. Her mysteries always feature cats, and Sandie and I are both cat lovers. But, Clea's going in a different direction now with her books, although there's still a cat in her new book, The Ninth Life.

If you're a reader or an author, you might be interested in Clea's guest post about changing her writing. Thank you, Clea, for taking time to write this.


Aspiring writers are often told, “write what you know,” and for a first step, that’s good advice, akin to “use the tools at hand.” Speaking at last November’s Crimebake, the New England crime fiction conference, the great Elizabeth George offered her own take. “Write what you want to know,” she said, addressing a crowd that already understood the basics of research and credibility. Again, solid advice, and George utilized it as starting point to discuss her search for inspiration in various locales. As I ready to launch the first book in a new series – a book that is significantly darker than my previous cozy series – I would take that one step further, and advise: write what you want to understand.


That’s what I did last year, as I began what became my new mystery, “The Ninth Life.” I couldn’t figure out at first why I was so captivated by the story that had come into my mind – a tale of two loners, Blackie and Care, trying to survive in an anonymous, dystopian city. The book is told from the point of view of Blackie, a feral cat, but his story and that of Care, a young orphan, become entwined in a narrative involving drugs, abuse, and a very dysfunctional idea of family.


I don’t mean to be disingenuous: when I started writing “The Ninth Life,” I had the core mystery in my mind. I knew what I wanted the key to the story to be, even if I didn’t know how to get there. But what I didn’t understand was why this story compelled me, or how to make the characters likable enough to evoke reader empathy (rather than simply sympathy or horror).


I should explain here, in case readers of this blog are unfamiliar with my work, that I usually write cozies. Not the kind with recipes or crafts, but amateur sleuth whodunits on the softer side – without much blood, sex, or violence, and, always, always with cats. I love these books and their protagonists: the overly bookish Dulcie Schwartz, the curious rock crit Theda Krakow, and animal psychic Pru Marlowe with her bravado and her muscle car. But this wasn’t one of them.


Some of it is that I’ve been reading darker than I write for a while now. In fact, Pru – who has a bit of an attitude, if not true noir edge – came about after I’d indulged in a bunch of Megan Abbott’s femme fatale crime fiction. I wanted to write that hard, I thought. Only when I tried, it came out funny – Pru only thinks she’s tough. Her tabby Wallis is much tougher.


Some of it is that I’d been thinking of writing a non-mystery for a while. Before I entered the world of crime fiction, I’d been a journalist and had written three nonfiction books.  And when speaking to groups of aspiring writers, I’ve often tried to explain that progression: that writing nonfiction always feels inherently useful in that you are delivering information. Writing fiction feels more daring – all you are giving the reader is the product of your own imagination. Maybe, I’d thought, I was ready to take the next step. To leave the familiar (and wonderful) world of mysteries to step out yet again – try a form with less definition, with fewer constraints. To write something serious – something that might even be called literary.


With that in mind, I toyed with various narratives about relationships, specifically different ways of exploring how a marriage evolves over the years. I wanted to capture how people change – maybe by writing out one life as if it were several. I thought “Orlando,” only, probably, with cats.


At any rate, I knew I wanted to create a work that felt real to who I am now – a survivor. An adult. A book that didn’t shy away from vulnerability or despair, from compassion and love. Only, I wasn’t writing it. A few paragraphs, some notes, and that was it. And so when I came up with the idea of this stray girl and her cat, I thought, well, I guess I’m putting the “serious” work aside for a while. Let me strike while the iron is hot. Because, as every writer knows, good ideas are never to be dismissed out of hand.


But something else was going on even as I began to think in terms of plot and motive, of red herrings and clues. Emotions were churning beneath the logical book-making plans, and I found myself thinking back to a principle I learned while writing my first nonfiction book, a memoir – that when an idea feels uncomfortably hot, feels dangerous, that means it’s important. That means it should be pursued. And so even as I began to craft what could have been a familiar whodunit, my characters started to make unexpected moves. To veer into some troubling situations and deal with some complex emotions. Somewhere between what I was reading and what I had been thinking about, I began to write a different – for me – kind of mystery.


Only a few chapters in, I hit a wall. I won’t say “blocked” – to a working writer, journalist or novelist, writer’s block is an indulgence, an excuse. But I lost my way. I wasn’t sure how to proceed. Or, really, why. The problem was, I think, that I was seeing the story through my narrator’s eyes – the POV of a rational creature. In this case, a cat, but still a character who had a certain distance, an approach based on logic. It wasn’t until I discussed the story with several people that I learned that the meat of the story lay elsewhere, not with Blackie, the cat, but with Care, the lost and lonely girl whom he observes, whom he tries to help. If he’s the head, she’s the heart. Hurt and bumbling, she’s trying to make sense of the scraps of her life. Trying to build a new one, find a place for herself in a large and dark world, as ... well, as do we all.


Does she? I’ll leave it to readers to find out, and for that larger world to decide. Me? I’m moving on, using Blackie’s keen-eyed gaze as my new POV, but Care’s heat-seeking heart as a touchstone, leading me toward what I want to write going forward.

Clea Simon is the author of the Theda Krakow, Dulcie Schwartz, and Pru Marlowe pet noir mysteries. (The latter two are ongoing and most recently feature Code Grey and When Bunnies Go Bad.) On March 1, her fourth series will launch with The Ninth Life (Severn House). She can be found at http://www.cleasimon.com.
Posted by Lesa at 4:00 AM

Thanks for giving me space, Lesa! I'll be curious to hear from other writers and readers.

I've read all of Clea's books, and I look forward to this new direction...great post!

I like the sound of this one. I've not read other books by Clea, but I've certainly known of her. Looking forward to hearing her on a panel at LCC. I enjoyed this article. :-)

I must applaud your bravery for following your muse into this darker world, Clea. Sometimes it's easier to stick with what we've already mastered, but where's the fun in that, right? This sounds like a fabulous new direction for your writing and I wish you tons of success with it.

Hi Shannon (waving madly) and thanks! I confess it has been interesting ... and so far the readers have come along. And thanks, Kay! I'll be on two panels at LCC - Friday, 9:30 on Genre Hopping and Sat. at 3 on Murder Most Cozy (Not focusing on this book!). I've been sick all week, but got out of the house today to get a cut and color -- the sine qua non of me making a public appearance this weekend (I've left it far too long). But now I'm good togo!

Clea, good to find you here on Lesa's blog!

I am not surprised that you are writing a more edgy series, or darker, because there has always been some edginess in the ones I've read so far and some dark spots. I anticipate it will be very interesting to read your new book.

I've been especially fond of Dulcie so was glad to read below that the series is ongoing. Yes, thank you for that!

Despite missing the old, I am happy for your discovery and will certainly take your advice with the admonition to write what you want to understand. Makes great sense!

I love cozies. I read cozies. I write cozies. But sometimes they're so sweet they make my teeth hurt. Kudos for you for having the courage to step out of your comfort zone and write something darker. I'm looking forward to reading the book.