Where We Belong by Hoda Kotb 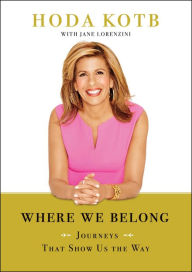 Hoda Kotb, with co-author Jane Lorenzini, took a look at several people who found their true calling in life. The resulting book,Where We Belong: Journeys That Show Us the Way, also includes short articles about a couple celebrities who took unusual paths in life.

I found the first account, that of Michelle Hauser, to be the most interesting. She didn't have the easiest life. Her parents divorced when she was young. She started working part-time when she was twelve. She was caught up with the wrong crowd, took drugs in high school, but continued to get As in school. She married too young, continued to work, and ended up in the wrong college for her, one that was religion-based. But, through all of the changes in her life, she kept her eye on her vision, that she wanted to be a medical doctor although she had been told by a counselor to consider a job in a factory. Michelle Hauser "found a way to rewrite her story", and her resulting story is inspiring.

In between the stories that are meant to inspire, there are accounts from Margaret Cho and Laila Ali, short reports from women who took untraditional routes for women, one as a comedian and one as a boxer.

There are stories of several couples, one couple that changed their entire lifestyle in their fifties; one in which the husband decided to make a major change in life, a change that his wife didn't agree with.

I was actually disappointed in this book, but that's because my expectations were different. I expected a book about people who made radical changes in their life to find their happiness. And, I'm going to say the authors felt all these people made those changes. My favorite story, about Hauser, really felt as if she set out on her path early in life, and didn't really change those dreams. And, even though the three couples in this book all came together finally with their decisions, I felt as if these were all changes in which the male in the relationship decided to go in a radical direction, and the woman fell in line. To me, the strongest women in the book were the ones who made their own decisions, Hauser, Cho and Ali.

As I said, it's just my opinion. Where We Belong just didn't live up to my expectations.