The Road to Little Dribbling by Bill Bryson 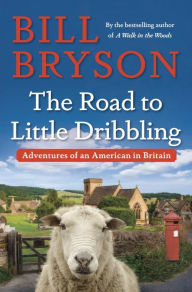 Bill Bryson's plans to take the test for British citizenship was one of the catalysts for his latest book. Twenty years after he wrote Notes from a Small Island, it was time to take stock of his new country. The result is The Road to Little Dribbling, about his walks from the southern part of Britain to the northernmost point.

Once again, Bryson roves about the British countryside, relating history, stories of roads, small towns, eccentric people, anecdotes about heroism. He has stories about British mythology and ancient Britain, stories about Stonehenge and the wrong information about King Arthur. In typical Bryson style, he rants about the roads, the idiotic plans for the country's airports. He rues the loss of charming shops and villages, the loss of quaint life as he remembers it. And, he does all of it with Bryson's sarcasm and humor.

At the same time, Bill Bryson realizes how lucky he is to live in Britain. And, he's aware of its beauty. He first went to Britain when he was twenty. "Gradually it dawned on me that I had found a country that was wholly strange to me and yet somehow marvelous. It is a feeling that has never left me." And, he sees London as the best city in the world. He spends quite a bit of time raving about its beauty, and all the parks that make it so beautiful. And, he celebrates all the neighborhoods and special places in the city. "London isn't a place at all. It's a million little places."

Don't read The Road to Little Dribbling as I did, straight through. Bryson's book actually becomes too  much, too many details, if you read it all at one time. Instead, it might be smart to read a chapter, and pick it up again for another chapter. That's really what I've thought of some of his earlier books as well, better in small doses.

No matter how you read it, though, you'll regret you didn't know Britain twenty-some years ago. It's Bryson's own comments that make you feel that way. "I really do think Britain had attained something approaching perfection just around the time of my arrival."

I liked his earlier NOTES FROM A SMALL ISLAND: An Affectionate Portrait of Britain very much, not least because I was familiar with a lot of the country myself. I will definitely read this one.

You'll enjoy this one, Jeff. Bryson still loves Britain, and it comes through in the book.

I've been meaning to read this -- thanks for the reminder!

You're welcome, Anna! My pleasure.

I must get this book! Thank you!