The Necessary Murder of Nonie Blake by Terry Shames 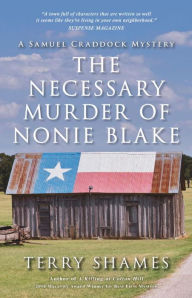 The Necessary Murder of Nonie Blake marks the return of one of the most engaging lawmen in Texas, Terry Shames' police chief, Samuel Craddock. The unpretentious, old-fashioned man knows just how to investigate a case in Jarrett Creek, but discovers that even an old dog can learn from a young pup.

No one in Jarrett Creek is happy to learn Nonie Blake has been released from a mental institution. She was incarcerated twenty years earlier when the fourteen-year-old tried to hang her younger sister. But, now she's back on the Blake ranch. Despite the buzz in town, Craddock has no reason to talk to the family until they call to say Nonie drowned on their property.

Nonie didn't exactly drown. It only takes minutes for Craddock to see that someone struck her on the head. And, the likely suspects are family members. But, the reclusive Blakes have little to say to the lawman, at least little that makes sense. However, it isn't until after the funeral that he discovers Nonie was released from the mental hospital ten years earlier. So, where has she been for ten years, and what secrets are the family hiding on their ranch?

Craddock always thought he could find the solutions to local crimes. "I have a good chance of getting to the bottom of a problem through my knowledge of the town and its workings; through the past and my relationships with people." But, it's not working in the Blake case. And, Craddock's new deputy, Maria Trevino, has other ideas. She heard about small-town cops at the police academy, and their ideas of just asking questions. She would rather put her boots on the ground, and she's ready to look for hard evidence. Together, Craddock and Trevino may find a surprising answer.

Craddock has always been a low-key investigator, and Shames' stories unravel at a leisurely pace as he talks to people. This style works for the series. Craddock is an appealing hero, and Maria Trevino is a likable addition to the cast. However, it was difficult to get invested in this mystery with a family that is so untrustworthy. In the case of The Necessary Murder of Nonie Blake, only Craddock really cares about the convoluted answers to the Blake case.

I have the first book in this series on my Kindle. Hope to get to it this year. And I love the cover on this one. How could I not? LOL

Kay, I hope you get a chance to read that first one, too. I don't think you'll be disappointed.