Past Crimes by Glen Erik Hamilton 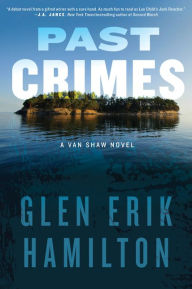 I haven't read the other novels nominated for the 2016 Edgar Award for Best First Novel, but I can see why Glen Erik Hamilton's Past Crimes was nominated. It's a strong, fast-paced story with an intriguing hero, and a victim who is just as fascinating.

Army Ranger Van Shaw was already stateside recuperating from his latest injuries when the message in Gaelic came from his estranged grandfather. "Come home, if you can." Since he was getting antsy waiting to rejoin his unit, he heads to Seattle. He arrives just in time to find his grandfather bleeding on the floor of his house while someone flees the scene. Once the police arrive, and Donovan Shaw is rushed to the hospital, it doesn't take long for them to focus on Dono's arrest record, and to question why Van showed up after being gone for ten years.

Dono Shaw was a thief who taught his grandson the business, "About stealing cars and forgery and security alarms. And money. How to find it, how to take it, how to hide it." Van fled that life when he left home at eighteen and joined the army. Now, he's reluctantly drawn back into that world as he tries to find the person who attempted to kill his grandfather. And, it will take some help from Dono's old friends as Van tries to uncover the secrets behind Dono's last job.

Hamilton's debut crime novel is an intense, action-packed story. Hamilton seems to have all the skills needed for success. The book is skillfully written, with flashbacks to earlier episodes in Van Shaw's life. And, those flashbacks build to a climax revealing why Van left home at eighteen, and, ultimately, revealing to Van himself who attacked his grandfather. All the characters are vividly brought to life; Van, his best friend, Davey, Dono's old friends. And, Hamilton manages to build the entire story around Dono Shaw without Dono actually taking the stage.

Glen Erik Hamilton's Past Crimes is an accomplished debut. I'm eager to read the March follow-up, Hard Cold Winter. I suspect this skilled author won't suffer from a sophomore slump.

okay - you got me. Adding this to my list

You're going to love it, Kaye!