Murder in Hindsight by Anne Cleeland 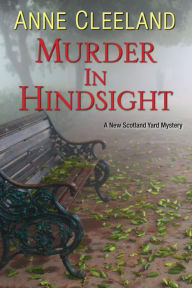 When I told Kaye Wilkinson Barley that I had just finished Anne Cleeland's Murder in Hindsight, I said, "sigh", and she agreed. I've finished all three of the novels about Doyle and Acton, and it's going to be hard to let the characters go.

Make no mistake about it. The three books in the series so far, Murder in Thrall, Murder in Retribution, and Murder in Hindsight, really can be read together. And, they definitely need to be read in order. They are so much more than a continuing story of crime investigations. In fact, Murder in Hindsight beautifully wrapped up the storyline about the turf wars between the Russians and the Irish. But, it's hard to wrap up the story of a marriage. In the latest book, Cleeland let readers have a peek inside Lord Acton's estate.

Doyle has already faced down Acton's mother. Now, she accompanies him to Trestles, the family estate. Despite the fact they're both playing roles while they're at the manor, Doyle discovers that Acton has a deep love for his home. But, there are still secrets about the background of her ever-mysterious husband.

One storyline involves recent murders in a park. Because Doyle has been digging through cold case files, she senses a connection to the past with the current murders. If she can figure out that connection, she may be able to find a killer.

There's not a lot I can reveal about the plot without spoiling the three books. Doyle, who is a human lie detector, can tell when people are lying. However, she still comes across as young and naive at times. And, it may be that innocence, her dependence on her deep Catholic faith, that creates an atmosphere of the past in these stories. Although these are mysteries involving New Scotland Yard, mysteries with cell phones and CCTV cameras, Acton's lifestyle with servants, the estate, and Doyle's innocence seem to set the stories in a different century.

Anne Cleeland's books are for those of us who devour books with fascinating characters. Doyle and Acton are unique, and the story of their developing, relationship is compelling. I already regret that I have to leave the couple behind.

(But, some lucky reader will have the chance to discover Action and Doyle.) Anne Cleeland will be giving away copies of all three books in the first giveaway of the year. Come back on Friday for details.)

Sounds like you may have introduced me to my first new-to-me series of the year!

You've been so enthusiastic about this series that I am looking forward to reading them too. Can't wait.

Glad I read this post today and not yesterday. Started the first one, on your recommendation, a day or two ago and was so startled when early on the marriage proposal came along. I'm confused about what kind of book this is. What exactly am I reading? But right now I really Like both characters. It will be interesting to see where this is all going.

I'm going to stress again, as Diane already discovered, this is a series about characters even more than crime. Diane, I'll be interested to see what you think when you get to the final chapter. Cleeland doesn't continue to use that style in the next book, but it works effectively for this one.

I have to say that I couldn't get into this series at all. Acton and Doyle were not credible characters to me. I finished the first book, but wasn't compelled to get the second and third. Having said that, I still applaud your continuing efforts, Lesa, to get the word out about new authors and authors new to me.

Thank you, Tricia. I know this series isn't for everyone. I just fell for the characters because they're odd. And, it's definitely not a typical crime series. Thank you, again!

Lesa and I love character driven novels. Agreed. We love so many of the same books and authors and that does seem to be our defining tie. Cleeland has, I think, knocked it out of the park with this series. Lesa sums it up beautifully and like her, when finishing the latest in the series all I could do was sigh. and want more.

I agree with you, Kaye. I hope we're lucky enough to get more.

Thanks for the recommendation. I devoured and really enjoyed the series. It is always a pleasure to find a new series where the characters have depth.