The Wives of Los Alamos by Tarashea Nesbit 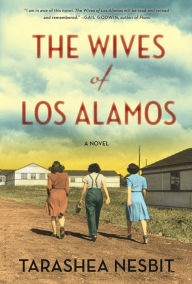 I actually read Tarashea Nesbit's The Wives of Los Alamos a year ago. However, it's the book we discussed last night for our book club. Knowing I wasn't home in the evening to read, it's appropriate to re-run the review of that fascinating novel.

We were no longer in charge of ourselves or even our own names." TaraShea Nesbit's debut novel, The Wives of Los Alamos, was a surprise. I never really thought about the families of the scientists who went to Los Alamos, the secrecy, the isolation, the loneliness. Nesbit's unusual writing style emphasizes the anonymity forced on these wives. It's a powerful novel, precisely because of that style with its emphasis on a collective group.

Nesbit chose to write about "we". She did emphasize that women had different feelings and ideas, but, overall, they were caught up in one giant government project. In 1943, scientists were approached, and those who accepted told their wives they were going "out west", without telling them where they were moving. These women, wives of scientists and academics, sometimes academics and scientists themselves, were told to pack up. They couldn't tell their parents where they were going. Some of the women figured it out by going to libraries, and finding names of other scientists in the books about New Mexico. But, none of the women were prepared for the dust, the dirt, the unfinished houses, the lack of bathtubs, the military life in an isolated fenced in community.

When they arrived in Los Alamos, they were often given new names. Mrs. Mueller was suddenly Mrs. Miller. Their letters were censored. They no longer knew what their husbands were doing in their lab. These intelligent women were faced with only each other for company, a school that was not yet finished, houses that weren't yet built. They competed for larger houses, only provided when a baby was added to the family. Children grew up in Los Alamos with no contact with their grandparents, no pictures allowed of their growth. And, the women were forced to build a community with other women who were equally in the dark as to what their husbands were doing.

The Wives of Los Alamos is a powerful book because of the secrecy demanded in this community. Nesbit's style enables the reader to sink into this life where strong women were forced to live drab, anonymous lives, not knowing how other women in the world were dressing, how life was changing. From 1943 to 1945, until the atomic bomb was dropped, these women were as imprisoned in their own lives as the families who were sent to internment camps in the U.S., a comparison that was mentioned once in the book. The story is all the more dramatic because of the quiet day-to-day routine of the lives in Los Alamos, and the names and words that are never even mentioned, or not uttered until the end of the book. Nesbit never says "Manhattan Project". Most of the scientists remain unnamed until the bomb is dropped. And, the women themselves only have first names.

The Wives of Los Alamos is one of the most quietly dramatic novels I've read. Nesbit's debut is a glimpse into unknown lives, a revealing story of women forced to live in secrecy.

Fascinating glimpse into an area I had not thought about, even though I've seen pictures of the houses (they look a lot like the military houses I grew up in). You've made me curious.

Really mixed reaction last night, Jayne, to the format of the book. While I loved it, others had a hard time with the "We" point of view, and didn't like it.

You might also want to read The Girls of Atomic City, a nonfiction account of the women who worked at Oak Ridge, TN, in support of the development of the atomic bomb. The writing could have been better, but it is a very interesting and eye-opening account of activities on a top secret government reserve during WWII.

Somewhere, Nancy, I think I have a copy of The Girls of Atomic City. I know I kept it because it sounded interesting. And, if I can't find it, the library will have it.

It's times like these that I wish I read fewer books on my iPad - I would have sent you the book!