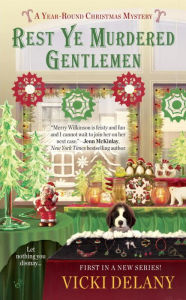 If you want a textbook example as to how to launch a cozy mystery series, try Vicki Delany's first Year-Round Christmas Mystery, Rest Ye Murdered Gentlemen. She skillfully introduces a small, cozy New York town, the shopkeepers and residents, along with a few possible suspects to a murder. And, she gives the entire town a reason for existence - Christmas celebration.

Merry Wilkinson is owner of Mrs. Claus' Treasures, a gift shop in Rudolph, New York. She left a man and a dream job that turned into a nightmare to return home to Rudolph, where Christmas is celebrated all year round. And, never more so than in December when the town launches the shopping season with the Santa Claus parade. Shopkeepers compete for the best float, and this year, Merry has high hopes of winning. At least she has high expectations until the tractor pulling her float won't start, and she's embarrassed that she holds up traffic, and Santa Claus' float has to move around hers. It seems like a small accident.

That evening at the after-parade festivities, a photographer for World Journey, a top European travel magazine, snaps pictures of the partygoers, while concentrating on one of Merry's employees, Jackie. A few people are a little annoyed, including Jackie's boyfriend. But, who wanted the photographer dead, a man who could have brought fame to "America's Christmas Town"? When Merry and her St. Bernard puppy find the man's body in the park that night, she worries about Rudolph's reputation. And, she has every reason to worry, as Rudolph's problems, and notoriety, pile up.

Delany's mystery is one of the most atmospheric stories I've read in quite some time. She creates a picturesque town, and then adds all the details of the Christmas holiday from carols to Santa to candy and Christmas shops with delightful ornaments and gifts. Then there are the townspeople themselves. Merry's father, Noel, is the image of Santa, and plays him to the hilt when he's in town. Her mother is an opera singer who leads the carolers. There's even a handsome toymaker.

Best of all, as the mystery unfolds, Merry keeps the new police detective in the loop, and calls for help. And, despite the large number of mysteries I read, the killer came as a surprise, although the ending made sense.

Vicki Delany is the author of the Constable Molly Smith novels, some of my favorites. Now, add this atmospheric, enjoyable series to the list. Rest Ye Murdered Gentlemen is a perfectly crafted enjoyable mystery.

I had thought this sounded like a good read.
You have confirmed it for me.

I have this in my TBR pile.

It was a good one, Libby.

Perfect for this time of year, Sandy!