Murder in Retribution by Anne Cleeland 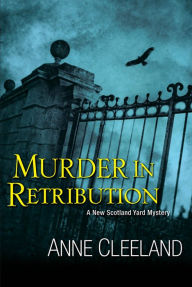 I'm in agreement with the reviewers who call Anne Cleeland's New Scotland Yard mysteries original. These clever stories feature two fascinating, reclusive police detectives whose personal lives are even more intriguing than their cases. And, the more Doyle learns about her enigmatic husband, the more she fears for his safety, not her own. In Murder in Retribution, though, she needs to watch out for herself.

The marriage between the Irish Kathleen Doyle, a first-year detective, and Chief Inspector Michael Sinclair, Lord Acton, is all the talk of Scotland Yard. How did she trap him into marriage? And, now that she's pregnant, and trying to work through morning sickness, she knows the gossips will have plenty to say. She's just determined to continue to use her perceptive ability to work murder cases. The Russians seem to have gone to war with the Sinn-split, an Irish terrorist group, and Russian and Irish bodies turn up in drainage systems and elsewhere. Acton, however, is determined to keep his wife out of danger. It's not easy to keep her out of danger, or out of trouble.

The couple have to work to balance their personal and professional lives, and friends and co-workers don't make it easy. While Acton's friends, long-time schoolmates, are interested, they don't approve of Doyle. And, it's obvious their housekeeper and Lord Acton's mother see eye-to-eye in their disapproval. It's not easy on anyone, particularly when Doyle is feeling so terrible. Even feeling ill, though, Doyle fears her husband knows more than he should about the gang wars going on in London.

At one point, Doyle realizes "The personal was more important than the professional", and that's true in the case of these books. If readers like the wry humor and the relationship between Doyle and Action, they'll return to the books. At one point, Doyle realizes "Acton knew how to dispose of a body with the best of them, which was a commendable trait in a husband." True. Very commendable, if you're willing to accept Acton's devotion to Doyle, while she herself is determined to remain a police officer.

There's an ongoing storyline involving the turf war between the Russians and Irish. But, it's the continuing characters who are the chief draw for these books. While Doyle and Acton stand out, there's a strong supporting cast, including Habib, Doyle's supervisor; her rival, Munoz, and a fellow detective, Williams, who shows an unusual interest in her. It's a remarkable cast, and they each have important roles to play in the books.

Murder in Retribution is a startling book in this unusual series. There's a reason the young officers at the Met refer to Acton as "Holmes", and his eccentric nature and behavior, his obsession, will appeal to many readers, while others will be shocked. Count me as one reader who will continue to return to discover more about Anne Cleeland's uncommon pair of detectives.

I went to go order the first book in this series and found I already own it. LOL

Love your review of this one and the one before. One of my goals for 2016 is reading from my own shelves, actual or virtual. I'll see how well I do with that goal. ;-)

Kay, you should at least try this series since you own the first one. I liked the first one, and the characters, so much that I actually went back and reread sections of it mid-point in the third book.