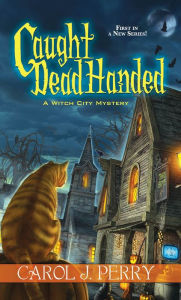 What better setting for a Halloween mystery than Salem, Massachusetts? Carol J. Perry launched her Witch City Mysteries by bringing her amateur sleuth home to Salem in Caught Dead Handed. And, Salem doesn't disappoint the reader.

Lee Barrett returns home from Florida, hoping for the on-air reporter job at WICH-TV. She grew up in Salem, living with her Aunt Ibby after Lee's parents died when she was five. Tragedy seems to follow her, though. Her husband, a NASCAR driver, died in a car accident. Now, she's back, living with her aunt. It's an odd cast of characters at the TV station, and she's angry and disappointed when she learns she flew from Florida for a job interview, and the job was already given to someone else. When she goes to her car, though, she notices a body in the water. WICH-TV moves quickly. The dead body is that of Ariel, their on-air psychic and professed witch. They immediately offer Lee the job introducing their late night horror films, and taking phone calls.

Lee's reluctant to play psychic, but it could be a stepping stone to another position at the station. Instead, it seems to be a stepping stone to danger. When another woman is killed in Salem, she's also linked to the station. And, Lee has glimpses of the murder in the obsidian ball Ariel used as a crystal ball. Is Lee a psychic herself, or is the dead witch leaving clues behind? And, why does O'Ryan, the cat who belonged to the witch, adopt Lee and her aunt?

Salem makes a perfect setting for a mystery involving a psychic and witch. It's appropriately atmospheric, with psychic fairs and gloomy days. The stories of Salem will make excellent background for additional mysteries.

Caught Dead Handed introduces an interesting cast, particularly Lee, her Aunt Ibby who was a research librarian, and Detective Pete Mondello. But, I saw the twist in the ending long before the conclusion of the story. The solution was a little weak, but it is a first mystery. I'll definitely be checking out the next book in the series.