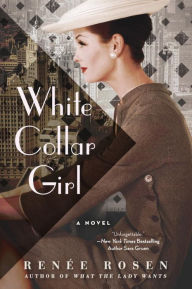 There's something about the journalism field that has always fascinated me. Combine journalism with  the 1950s, Chicago politics, and an ambitious young woman, though, and you have Renee Rosen's powerful novel, White Collar Girl.

Jordan Walsh came from a family tradition of of journalism. Her father, her mother, her grandfather, and her brother had all worked as reporters. But, when her brother, Eliot, was killed by a hit-and-run driver, the death destroyed Jordan's family. Now, she's determined to step up to take his place. But, her job as a society writer at the Chicago Tribune isn't quite the job she had in mind. She doesn't want to write the White Collar Girl column for career-minded women. She wants to be a reporter covering the hard-hitting stories. But, in the mid-1950s in Chicago, it's hard for a woman to find a place at the news table.

Jordan wants so badly to make a difference. She knows, "As a reporter you have a responsibility to reveal the truth." And, she fights for that. She finds one high-placed source. When her first big story goes to a man, and she sees her story under his by-line, she's furious. As she digs for other stories, she often finds herself invisible, looked over as stories go to men, and the men in the newspaper office either ignore her or poke fun at her. But, Jordan Walsh is determined to make her name in the newspaper field, to find the bodies buried in Chicago politics and lies. Jordan Walsh has the "family curse", according to her father. "That's what reporters do. We question. We probe. We go into those dark places that scare everyone else. They even scare us, but we still do it because we have to. We just have to."

Rosen has done her homework. The Author's Note indicates the true stories that turned into Jordan's stories, which brings this book to life. However, this book is more than just an account of dirty politics in Chicago in the 1950s. It's the story of a woman butting up against the boys' clubs, and fighting to make a name for herself. Jordan Walsh has to decide what's important in her life. Is it love, marriage, and a family, or is it journalism? She watches the roles other women select. She tries different roles for herself. When it comes right down to it, Jordan is determined to be a reporter in a man's game. And, Rosen truly shines a light on that role, the struggles for working women in the 1950s.

If I hadn't known the plot behind White Collar Girl, I might not have picked up the book. That cover illustration doesn't do justice to a woman trying to fight for her role in the newspaper business, although it is the picture of any female reporter assigned to the society pages. White Collar Girl by Renee Rosen is so much more, a powerful, moving story of a strong woman who made room for other women to work, and to shine.

oooh - this sounds wonderful! thanks, Lesa!

I was wondering about this book. Thank you so much for the review. I do want to read it.