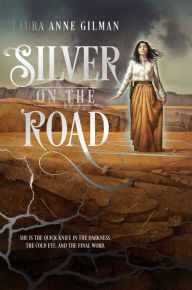 I had a fun evening last night with Ashton Lee, author of the Cherry Cola Book Club books as guest speaker at our Red Bank Branch Library, followed by dinner. That meant a night away from my book, though, so I didn't have time to finish it.

I'm reading a terrific western fantasy. Silver on the Road by Laura Anne Gilman is the first in a proposed trilogy. It's set in the early 1800s in an alternate North America, divided into sections. There's the United States, a country that ends just west of Illinois. There's the Spanish Protectorate, much of the Southwest. And, in between is the Territory, the Devil's land. It's a place said to be overrun by magic, magicians and monsters. But, Isobel calls in home. When she's sixteen, she is given a choice. Her choice is to become the Territory's Left Hand, taking to the road, accompanied by a mentor named Gabriel, who will teach her the dangers of the road, as well as the stories of the people and laws of the Territory. (Love this book!)

What are reading? Have you headed into the past or the future? Is it this world or another one? I'd love to know what book has caught your attention.

I'm reading an ARC of No One Knows by J.T. Ellison.

I'm waiting for Silver on the Road from the library. I just finished An urban fantasy, A Red-Rose Chain by Seanan McGuire. Now I 'm going to start A Likely Story by Jenn McKinlay.

I'm reading Rogue Lawyer by John Grisham, and it is terrific! It is quite different, in that there is not just one case that spans the entire book. Different sections highlight different different cases or situations. I can't wait to see what happens next. And the protagonist is a hoot!

Too many library books!

I'm reading Lawrence Block's CATCH AND RELEASE, not a library book but mine, a collection of his short stories.

Also, went back to Sarah Vowell's LAFAYETTE IN THE SOMEWHAT UNITED STATES. I like her snarky style. I need to finish that and read Jeffrey Siger's latest Ch. Insp. Andreas Kaldis book, DEVIL OF SELPHI, because they need to be returned to the library soon.

Let's not even get into the subject of the half dozen other library books I have waiting to be read.

Hi Lesa (yes, there is life in Edinburgh...)

I have just finished Nature's Architect by Jim Crumley. It was sent to me by the publisher (the excellent Saraband Books) and I must admit I put off reading it for a while, as although I have heard Jim Crumley speak at book events and always enjoyed his sessions very much, I wasn't too sure about 200 pages on the reintroduction of beavers into Scotland. How wrong I was - it's a wonderful book, very easy to read, beautifully written and fascinating. Jim is a highly acclaimed nature writer who's also into jazz and architecture - and you get a bit of each (and some history) in this book. He has no time for government 'conservation' schemes, his mantra being 'Let wildlife manage wildlife'. He's a great admirer of Sir John Lister Kaye, who runs the Aigas centre in the Scottish Highlands.

I ploughed through this book in a weekend - really couldn't put it down. Highly recommended.

Enjoying both novels, but really prefer the physical book format. Both are from my local library.

I just loved reading this list of books. Thank you for sharing! Lori, J.T. Ellison would be pleased you're reading her book. I really like this new series by Charlaine Harris, Bill. Sandy, I hope you like Silver on the Road as much as I do. I'll finish it tonight. Margie, I like the sound of the protagonist in Rogue Lawyer. I agree, Jeff. I have stacks of ARCs, but my library books have due dates. Vowell & Siger, two of my favorites. Good to hear from you, Rosemary! It's good to know there's still life in Scotland, whether it's yours or the beavers. (smile) I'm with you, TFJ. I prefer the physical book.

Thanks, everyone! I love hearing what you're reading!

I am reading my first and probably my last Laura Lippman book, Hush, Hush. After reading some of if and being woken up by my book going thunk on the floor, I looked up the reviews. Not so good. This book is like the person in the back seat of a car who will not stop chattering. The idea of story seems very interesting but it goes on and on. Trying to push through to the end so I can review and not look at the ARC amu more!

I just finished Big Magic by Elizabeth Gilbert (enjoyed her perspective on creativity) and now am reading Catriona McPherson's The Child Garden.

I just finished The Lake House by Kate Morton. I think it is one of my favorite books this year. Now I am reading something a little lighter-Booked for Trouble by Eva Gates. So far it is pleasant but seriously cozy authors need to come up with a different plot device other than the ubiquitous love triangle :)

Main Street by Sinclair Lewis - trying to finish this one up. I am getting tired of the sameness of the characters and in some ways the plot. It seems nobody is growing or changing and I suppose that may be the point of the book.

The Red Pyramid by Rick Riordin. I recently finished The Lightning Thief. At the end was an excerpt for The Red Pyramid that piqued my interest. I am enjoying it as much as ..Thief.

Silver On The Road is looking rather interesting! But, I think it is time for another cozy. I am reading the Murder, She Wrote books in order published. Next up is Knock 'em Dead, but I need to get to my used book store to see if I can find it.

I'm reading The Yellow Arrow Murders by Van Wyck Mason. Written in the 1930's, it features Captain Hugh North, always described as an intelligence officer, but he usually acts more like a detective.

Bad Times #4: Helldorado by Chuck Dixon: Time travelling adventurers go back in time to find one of their own amongst cave men and gigantic creatures.

Sharon, Sharon. You are so right about that love triangle. It gets tiring, doesn't it?

Ah, Carol. I haven't read that one, and I don't pick up her books very often. There's a reason.

I hear very good things about Big Magic. Since I'm not creative, it won't mean as much to me as it does to some, but it sounds interesting.

A classic, a fantasy, and, upcoming, a cozy. Works for me, Bumblesby!

How's the time traveling one, Glen? That's the one that sounds interesting to me.

It's pretty exciting, with a lot of action. Cave men were tough, tough people.