We Were Brothers by Barry Moser 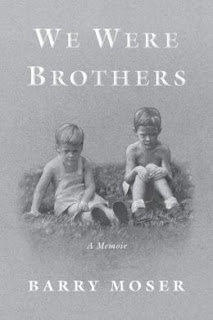 If brothers can have such animosity that they fail to actually discuss their differences until they're in their sixties, it's no wonder countries and people worldwide can't find common ground. Barry Moser addresses the first issue, that of brothers, in his memoir, We Were Brothers.

Artist and illustrator Barry Moser was born in the same Jim Crow South in Chattanooga, Tennessee, as his older brother, Tommy. They were only three years apart, but Tommy stayed in the south, while Barry went to New England. They both lived with the same racist culture, one in which their mother's childhood friend, Verneta, was not welcomed at the front door when company was in the house, until the night the Ku Klux Klan paraded through town. This story of a family, a neighborhood, and two brothers asks a question that puzzles Moser to this day. Why did he leave the south, especially to escape its racism, while his older brother stayed, expressing racist comments until Barry had the temerity to call him on it?

Moser traces it back to feelings of inferiority in his family. They grew up racist. The boys were both poor students in school, bullied there and later in military school. Was racism a way for men who felt inferior, who feared for their status, to feel better about themselves? Barry Moser says they grew up racist, taught that black folks were never as good as them, although his mother wouldn't have survived the death of her first husband if it hadn't been for Verneta. He admitted they were brought up to respect an individual black person. "But as far as our family was concerned the black race was show, shiftless, and ignorant."

Barry Moser admits his memoir is based on his memories. His brother is gone, dead of cancer, and his memories might have been different. But, in examining the animosity between the two, and their feelings about race, he searches for answers. How could two brothers, growing up in the same environment, grow so apart?

We Were Brothers is a thoughtful book. It's actually a collection of vignettes, small episodes in the lives of two brothers. But, the writing is enhanced by beautiful sketches by Moser, portraits of the family members in the book. Maybe men who are brothers won't be surprised at the occasional viciousness of the fights between Barry and Tommy. It struck me as sad. And, in the context of world events, although the two brothers reunited before Tommy's death, the book doesn't elicit a great deal of hope. Maybe people can unite, but there were years and years of hatred, viciousness and fights before they find common ground.

It seems to me that there are quite a few mysteries, and other fiction books, that deal with animosity among brothers. My father and one of his brothers were so completely different that they barely spoke. I guess it is like you say, 'you can choose your friends...'