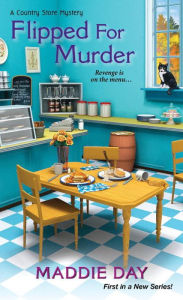 Edith Maxwell recently appeared at the North Park Branch of the Evansville Vanderburgh Public Library while she was on her Indiana book tour. She was promoting Flipped for Murder, her first mystery written under the name Maddie Day.

Edith said she's always been a writer. As a kid, she wrote fiction. Her resolve was even stronger when she was in third or fourth grade and her mother said, "Edie, you're a good writer."

What's Maxwell's connection with Indiana? Why set a book there? She has a PhD in Linguistics from Indiana University in Bloomington. And,  Maxwell Hall on the campus is named after her family. Generations of her family attended IU. Her great-great-great grandfather was one of the founders, and her great-grandfather was the first dean of the IU Medical school.

After graduation, Maxwell did academic writing. She married, and stayed home to raise her family. In the meantime, she did small organic farming. She became a childbirth expert. And, she read mysteries, such as the Goldy Schulz ones by Diane Mott Davidson. It was her husband who said to her, you're always reading mysteries. Why don't you write one? She had every morning to herself while her kids were in school. So, she decided to write what she knew, a mystery about a small organic farm. She never studied creative writing. Eventually, she set that book aside, and went back into the lucrative work force.

Maxwell went into technical writing. She raised two boys. She didn't have the time to work on a full-length novel, but she did have time to write short stories. Some were accepted for juried anthologies. In 2008, she was laid off after fourteen years in the high tech field. She wrote a short story about a murder after a layoff, called "Reduction in Force". Then, she decided she might as well try writing a novel again.

It had been too long since she worked on the organic farming mystery, so she started work on a new one, Speaking of Murder. It was about a Quaker linguistics professor in Massachusetts. Maxwell worked on her writing for several years. She didn't have an agent, so she submitted her work to small presses because an author didn't need an agent to be published by many of the small presses.

And, then she joined Sisters in Crime. It's an international organization that was started thirty years ago by some of the prominent women in the field, Sara Paretsky, Nancy Pickard, Margaret Maron. They were aware women were not reviewed as often as male authors, and not nominated for awards as male authors were. The New England Crime Bake, a conference for writers, is run by Sisters in Crime. At that conference, an agent reached out to authors looking to develop cozy mysteries. Maxwell wrote to John Talbot, and introduced herself to him. She told him she had a mystery about a local organic farm. He sold it to Kensington within a week. That book became A Tine to Live, a Tine to Die, the first Local Foods mystery. 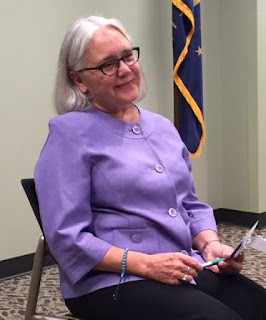 How did the Country Store mysteries come about? A friend from IU's linguistics program dropped out of school, and bought a run-down country store in Brown County, Indiana, and turned it into a breakfast-and-lunch place, the Story Inn. Since authors never know if a series will be picked up until after the third book, Maxwell wanted something besides her Local Foods mysteries. (That series contract has been renewed for two more books.) Maxwell loved Brown County and the Bloomington area. She has a history there. So, she based a mystery there.

Flipped for Murder, written as Maddie Day, is set at a breakfast and lunch place called Pans 'N Pancakes. Robbie Jordan, who grew up in California, as Maxwell did, moved near her mom's sister, Adele, in Brown County, after Robbie's mother died. Robbie used her savings and a small inheritance to buy and renovate a run-down country store.

The Country Store mysteries will come out every seven months. The Local Foods ones come out once a year, in May.

In the meantime, while she was writing these, Maxwell moved to Amesbury, Massachusetts. She's a Quaker, and she can now walk to church. Amesbury was once a leading building of carriages until a fire burned down the carriage mill. Maxwell wrote a short story about a Quaker girl who solved the mystery about the arson that burned down the mill. She's 26, an unmarried midwife, who listens to the secrets detectives can't. She delivers the babies of the poor and the rich. Maxwell signed a three-book contract with Midnight Ink for this series. The first, Delivering the Truth, will be out in April.

In answering questions, Maxwell said it takes her about four months for each book. It's now a full-time job.

She blogs with a group of writers who call themselves Wicked Cozy Authors, because they're "wicked awesome". They support each other, and go on an annual physical retreat together.

Edith Maxwell said she likes to write series. She gets to know her world, and some of the people in it. Authors who write standalones, such as Catriona McPherson and Hallie Ephron have to create a new world every time. 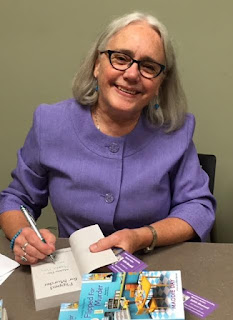 Edith Maxwell's website is www.edithmaxwell.com, and, as I said, she blogs at http://wickedcozyauthors.com.

Sounds like a great event! Will have to check out all those wicked cozy authors!

Lesa, I enjoyed this interview a lot. It brought out many things about Edith that I find admirable and inspiring, especially her initiative and ability to move on and do new things.

You should check them out, holdenj!

Lesa, thank you. Years ago, when Louise Penny started her blog--when she was writing her first book and when it was just out--I discovered a different world. I learned about her and her book from a francophone Québecois family history list. Despite that it was about an Anglo village in Québec, they loved it. That world, that little village, her early days of blogging--through which I came to know you and others important to me now, lifted me out of the unhappiness I was in. I couldn't hold the paperback version of Still Life that was available by then. I called everywhere looking for a hard copy that would fit in my book holder and stay open while I read. Word got back to Louise, and her assistant, Lise found one and sent it to me. Through that relationship of people and story, background and survival... and the book, I found a way out of pain and discovered ability. I still call on those reminders of faith and discovery, and I am forever grateful. I still keep in touch with commenters on that early blog. <3