Home by Nightfall by Charles Finch 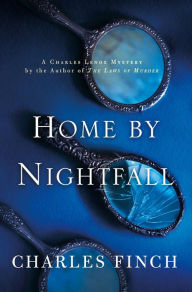 I hadn't read any of the previous Charles Lenox mysteries by Charles Finch. Now that I've read his ninth, Home by Nightfall, I regret missing the the previous books. At the same time, Finch makes it remarkably easy to pick up the series at this point. It's an intriguing story, combining family, two mystery cases, and a leisurely-paced country investigation by a "gentleman sleuth" and his brother.

Ten months earlier, Charles Lenox, having left Parliament, started the first detective agency in England. It was touch-and-go for a while, but his life, both professional and personal, is very satisfying. The agency is doing well enough to employ a larger staff. Lenox loves his wife and is ga-ga over his daughter. All of London is buzzing about the disappearance of a German pianist, and Lenox is as fascinated as everyone else. His older brother's suffering is the only painful aspect of Lenox' life. Sir Edmund Lenox lost his wife only five weeks earlier, and the grieving widower is wasting away, with his two grown sons out of the country.

Despite Lenox' fascination with the strange disappearance of Muller from the theatre, he knows how important it is to spend time with his brother. And, the trip to the family estate in the country proves to offer its own mystery. First, a frightened insurance agent tells a story of a missing bottle of sherry, a face at a window, and a drawing of a young girl. Then, an attempted murder draws both brothers into the investigation, into a case involving village secrets.

Set in 1876, Finch's mystery is a leisurely paced, detailed, carefully developed story. It's a quiet story, with historical overtones. Although there are criminal investigations, involving serious issues, Finch's book also has moments of humor. Best of all, it has a strong emphasis on family with two caring brothers, sympathetic characters, at a time period when men didn't express their affection for each other. The family elements add warmth to characters who could have come across as stuffy with the standards of the time.

Home by Nightfall is anything but stuffy. It's a carefully developed story with a strong sense of time and place. Historical details, such as the background of the Riot Acts, add to the pleasure of this book. And, Finch, with the character of Charles Lenox, makes an important discovery about parents and family. "While one's parents were alive, if they were decent parents, one was always at least in some small part of one's self protected from life, from fear, from reality." Home by Nightfall, most of all, is a story about family.

Thank you for introducing me to this author.

You're welcome, Libby. I wish I had picked his books up earlier. My own fault. I've known of him since the beginning.

You make me want to read this series, thank you!

I'm hoping to get this book. I had the same reaction to Louise Penny's books. I came across her 8th book, I think, and after having read it, I had to go back and get all of her other books. So glad I did. I have a feeling I will do the same with Charles Finch's books.

Good! I hope you do have the same reaction with Charles Finch's books, Bonnie.

I have had the first one on my shelf for years. About time I read it! Thanks. And is the Ovidia Yu who is commenting the writer??!! I have two of her Aunty Lee books waiting for me on the shelf!