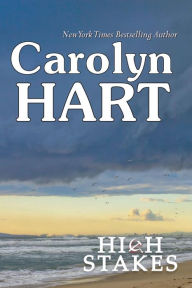 When Carolyn Hart discovered a forgotten manuscript, she also discovered an atmosphere of the past. High Stakes will remind readers of the romantic suspense novels that were so popular in the 1970s.

Aspiring actress Kirsten Soderstrom fears she may have to return home to Minnesota as a failure. But, just in time she sees a want ad that offers excellent pay for a blonde actress. She's a little doubtful, and she never expects to get the job when she sees the long line of blondes waiting for a try-out. And, she's even more dubious when she's hired for a job that will last a couple weeks, but she's required to work twenty-four hours a day. When she demands answers, she's told it's a sting operation. The FBI knows a U.S. Senator is a crook, and they want her to help to bring him down.

Kirsten learned to be honest from a man she always admired, her father. And, she was willing to help her country, to trap a dishonest politician. It doesn't take long, though, for Kirsten to lose her heart to a man she's supposed to distrust. But, the more Kirsten learns, the more uncertain she is about the plan. And, when the plot goes wrong, it's Kirsten who is trouble, risking not only her heart, but also her life as she becomes the target for everyone from the CIA to Russians.

In Hart's High Stakes, she allows readers to see viewpoints from both protagonists, which works well for a romantic suspense novel driven by a conspiracy. Who's behind the plot? It's a storyline that keeps the characters, and the reader, guessing until the last minute.

Miss those romantic novels of the '70s? You might want to bring back memories of the past with High Stakes.

*****
FTC Full Disclosure - The author, and the publisher, sent me copies of the book.