What You See by Hank Phillippi Ryan 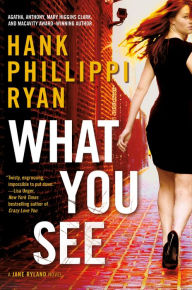 What do witnesses actually see at a crime scene? Can police actually trust witnesses? In less than forty-eight hours, Hank Phillippi Ryan forces her characters, homicide detective Jake Brogan and reporter Jane Ryland,  to confront those questions. And, they must wrestle with their own observations in What You See.

Wouldn't you think it would be easy to find a killer when a man is stabbed across from Boston's City Hall during a busy lunch hour with tourists and downtown workers on the street? Detective Jake Brogan and his partner, Paul DeLuca, catch the case. They're hoping someone caught the killer on a cell phone or camera. And, a young photographer hopes he caught the actually killing, so when he sees Jane Ryland on the street, he latches onto her, hoping he can sell his pictures. He doesn't realize Jane left her job at the newspaper because of ethical issues in her last story there.

Three jobs in five years. In journalism, Jane finds "always a new ethical dilemma without any new rules to resolve it." She's interviewing for a new job at Channel 2 when they need someone to cover the stabbing in Curley Park. So, she's a freelancer when she follows an ambulance into an alley, finding Jake and DeLuca there. Once again, the two are working the same case.

But, as much as Jane wants to cover the Curley Park stabbing, she turns away from the story when her sister calls with an emergency. Now, she must decide when to put family before the job.

Ryan juggles multiple storylines and multiples viewpoints as well as any author in the business. I've seen complaints about the multiple voices, but, in this case, it works beautifully. This method allows readers to know what Jake and Jane know, as well as what other characters know. But, it still takes time and skill to bring all the threads together to solve the complex cases. With five different narrators, the reader sees the story from a number of views, which makes it fascinating.

Journalists and detectives work perfectly in a crime novel, but Jane and Jake have a difficult time with their relationship. Their struggles with a relationship that seems doomed because they cover the same cases is an essential part of this series. Their personal issues, and, in this case, family demands, bring the two characters to life.

There are multiple storylines, multiple narrators. It works beautifully, but to summarize more would be to ruin the book. Ryan's latest book is riveting, a page turner that is difficult to put down. It keeps the reader guessing. Trust Hank Phillippi Ryan to bring all the characters and threads together in a compelling crime story. Just don't trust What You See.

So excited to see she has a new book - love all of her books - can't wait to read this one.

Great, Donna. If you love all her books, I'm sure you'll enjoy this one as well.

Hank is a master of the genre. Cannot wait to read this one!

I was lucky enough to receive an ARC of this book: fantastic! Thanks for bringing it to others' attention, Lesa.

You're welcome, Clea and Tricia. I hope you enjoy it, Clea!