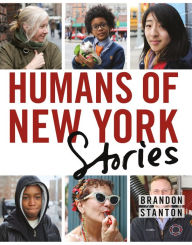 I was always a fan of Frank Warren's PostSecret books. For some reason, Brandon Stanton's Humans of New York books remind me of those. Both collections allow complete strangers to give readers a glimpse into their lives. Warren's postcards are anonymous, though, while Stanton's, without giving names, are photos. In the first Humans of New York book, Stanton included short quotes from his subjects. Now, in Humans of New York: Stories, the subjects tell stories of their lives, stories that make them the people they are today.

Stanton, who refers to his project as HONY, says the simple way to describe what happened with his photography project is that "It's evolved from a photography blog to a storytelling blog." In 2010, he started to photograph people on the streets of New York, posting them on a blog. The readership grew until, now, there are over fifteen million readers.

Why do we all turn to this blog? Stanton asks questions of his subjects, and allows them to tell their stories. So many of them are stories that touch the heart. These are stories of life, the successful, the failures, the tragic. There are stories of great love and loss. People discuss God and faith, relationships, family. Who are the people in the photos? They are students, brothers and sisters, veterans, widows and widowers, cancer survivors and those who lost loved ones to disease. People talk about meeting the person they love, or separating from someone after years of marriage. Sometimes it's a child that will break your heart, or a courageous survivor of war or the streets. In other words, these are people we recognize as fellow humans struggling or succeeding with their lives. The combination of photos and stories is compelling.

Stanton refers to the "in-depth storytelling that the blog is known for today." Stories make us human. Throughout the centuries, man has told stories to share where we've been, where we are, and our hopes for the future. Stanton is carrying on an old tradition, giving people the chance to share their voices, to tell us about their lives. Humans of New York: Stories is a beautiful addition to one of man's oldest traditions.

Lesa, I'd never heard of this blog before so just checked it out. Thanks!