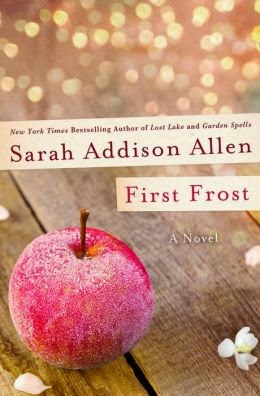 Sarah Addison Allen takes readers back to Bascom, North Carolina, home of the bewitching Waverley women from her first novel, Garden Spells. Now, in First Frost, three generations of the family are uneasy as they wait for autumn to end. Until the first frost, the Waverleys are restless, uneasy in their very being.

In Garden Spells, the two sisters, Claire and Sydney were learning to live with their gifts, and each other. The gifts, and the enchanted apple tree in their garden, separated them from the rest of the town, although a number of the people of Bascom had unusual gifts. Now, though, Sydney's daughter, Bay, is a teenager, fifteen, a restless enough stage for a girl, but worse for Waverleys in the fall. Bay has always known where people belong, and she's convinced she belongs with a boy from a wealthy family, a family with a history with Bay's own mother. Claire's ability to put just the right ingredient in food has grown into a candy-making business, and she's driven to make it succeed. And, both Bay and Claire have seen a stranger in town, a man who seems to disappear like smoke. If it doesn't get cold soon, the Waverley women may do something they'll live to regret. "They always got restless before first frost, giving their hearts away too easily, wanting things they couldn't have, getting distracted and clumsy and too easily influenced by the opinions of others. First frost meant letting go, so it was always reason to celebrate."

And, a Sarah Addison Allen novel is always reason to celebrate, especially when the Waverley family returns. Allen's magical realism is entrancing, filled with beautiful phrasing, a fascinating town, and a supportive family. I could go on and on about the author's use of phrases to draw the reader in. Allen uses all her skills to set the stage for a story that conjures up longings and secrets.  First Frost is just her latest novel of secrets and family. Make no mistake about it. Claire and Sydney and Bay, along with their cousin, Evanelle, may have special gifts, but their greatest gift is the love they share, and the support they, and the men in the lives, give each other.

First Frost is an enthralling story, one that keeps the reader as restless as a Waverley, wondering how the women will fare. Storytelling is Sarah Addison Allen's gift, a magical one she shares in this latest novel.

*****
FTC Full Disclosure - Upon request, the publisher sent me a copy for review.

Sounds wonderful, Lesa, and the cover is even magical.

Isn't it, Patricia? Garden Spells, and, now, First Frost, are my two favorites by Sarah Addison Allen. I like the Waverley women.

Should I re-read Garden Spells before I read First Frost? I don't feel like I remember it very well.

I am SO happy you loved this, Lesa! I love the magic she shares with us also.

You don't need to re-read Garden Spells, Christie. She gives you enough background to remember. Now, these are my two favorites of her books.

As I told Christie, Kaye, it ranks up there with Garden Spells.

I have read another book by Sarah Addison Allen and really enjoyed it, and I'm looking forward to reading this book.