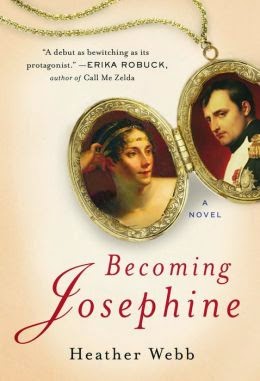 The only thing as enjoyable as reading a book by a favorite author is discovering a debut author who writes beautifully. Heather Webb's historical novel Becoming Josephine brings a woman to life, the one we know of as Josephine Bonaparte. She had a fascinating life long before she met Napoleon Bonaparte. In this novel, we watch Rose Tascher grow into a beloved Empress.

Rose Tascher grew up in Martinique. Watching her father run around on her mother, sleeping with slaves, hookers, and mistresses, Rose was determined to marry for love. Her entire life she looked for love and security. She was thrilled to be sent to France to marry Alexandre de Beauharnais, only to find out her new husband's affairs resembled her father's. But, she did have two children she loved, and then she was legally separated from her husband.

Becoming Josephine is a story of revolution and survival. Rose de Beauharnais survived a slave revolt in Martinique and the French Revolution's Reign of Terror, when she was imprisoned. But, time after time, she turned her friendships and romances into survival. And, when she meets a shabby looking general named Napoleon Bonaparte, she may have finally found love and the future that a voodoo priestess once predicted.

Heather Webb's debut historical novel is a beautiful introduction to a fascinating woman. Josephine is usually defined in relationship to Napoleon Bonaparte, but Webb brings her to life as a woman long before she met Napoleon. And, she introduces her as a charming, intelligent woman searching for safety for herself and her children. Webb's characters live on the pages.

Becoming Josephine is a fascinating reintroduction to a woman we only think we know from the pages of history. It's an outstanding debut.

*****
FTC Full Disclosure - I was sent a copy in order to participate in a TLC Book Tour.

I enjoyed this book when I read it over the summer. I suspect I heard about it here first.

I hope so, Trisha! But, no matter where you heard about it, I'm glad you enjoyed it.

Wow… sounds really good! I'll have to read it.
Thank you once again, Lesa.

You're welcome, Reine. I love to discover new authors & share them with other readers.