The Wedding Bees by Sarah-Kate Lynch 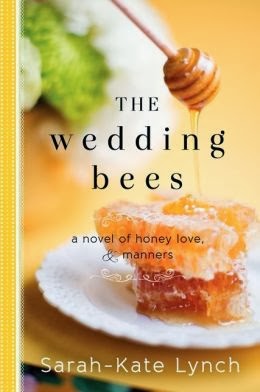 It takes a displaced southerner to bring New Yorkers together, but Sugar Wallace isn't so good at helping herself. Instead, the bees she has always tended decide it's time for Sugar to find someone in Sarah-Kate Lynch's charming novel, The Wedding Bees.

Sugar Wallace has been on the run for fifteen years. She left Charleston, South Carolina with only her bees. "Along with her manners, the accent she tried so hard to soften, a single china cup covered in blue daisies and a weathered box of essential oils, they were all she carried with her from her past." Each year, Sugar packs up her queen bee, this time Elizabeth the Sixth, and the other honey bees, and heads for a different location. At thirty-six, Sugar lands in Alphabet City in New York. She no sooner arrives than she stumbles across two men who will change her life. Theo Fitzgerald actually cushioned the blow when an older man who looked homeless, George Wainwright, fell. Both men would force Sugar to reexamine her life.

Theo immediately feels an attraction to Sugar, but Sugar, knowing what she did in Charleston, wants nothing to do with a man who causes such a strong reaction in her. Instead, she turns to changing the lives of the people in her apartment building, a little honey at a time. There are the two neighbors who never have anything good to say to each other; Nate, who only comes out on his balcony at night; Ruby, who moved out, away from her mother who sent her to hospitals and therapists each time Ruby collapsed, and Lola, who is desperate to keep her young son from continuously crying. Sugar knows that some attention, good manners, and a little honey will help all of them. Only George recognizes that Sugar herself needs help. Well, George and Elizabeth the Sixth. Elizabeth the Sixth knows she has a special purpose in life, and she'll use all her powers as queen bee to help Sugar find happiness.

The Wedding Bees really is "a novel of honey, love and manners". It's a pleasure to see the respect Sugar shows for George and the residents of her apartment building. Lynch's story is rich in characters. And, there's a rare tenderness between many of them, not so much romantic love, as a quality of caring for each other. These are not qualities often seen in novels, respect and tenderness. Looking for a feel-good book about a woman trying to change the world in her small way, one person at a time? You might not have even known you were looking for an engaging story about a determined queen bee. Sarah-Kate Lynch's The Wedding Bees is that delightful book.

*****
FTC Full Disclosure - The publisher sent me a copy of the book after I requested it.
Posted by Lesa at 4:00 AM

This isn't a book I would normally pick up, but your review has me thinking I would enjoy it. Thank you.

You're welcome, Karen. I liked it!