The Forbidden Stone by Tony Abbott 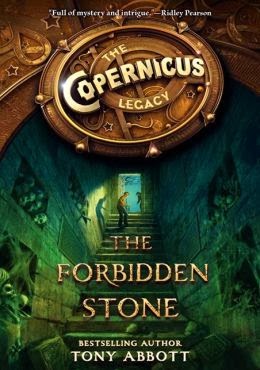 I just love some of the adventure series for young people. I just hate it that they're series and I have to wait a while to read the next book. Ever since Harry Potter, authors know they can write big books and readers will latch onto them. And, The 39 Clues books proved that readers would follow adventures in book after book. Tony Abbott has written almost a hundred books for young readers. Now, he launches a series of six books, The Copernicus Legacy, beginning with The Forbidden Stone.

When he was seven, Wade Kaplan received an antique celestial map from a friend of his father's, a man he called Uncle Henry. Now, six years later, that map is the first key to a mysterious quest. Around the world, astronomers are dying in unusual "accidents", including Uncle Henry. When Wade, his father, his stepbrother, Darrell, and two friends, Becca and Lily, head to Germany for Uncle Henry's funeral, they have no idea they'll soon be involved in a quest, chased by dangerous men in black, and an even more dangerous woman.

"It's all codes and half clues, places, word games, quotations, number tricks." It's a fun adventure. Darrell sees it as a spy game, until it becomes dangerous, and Wade's father is arrested, and the police seem to be enemies. Who can they trust when they can't even trust the police? The small group find themselves on a worldwide quest set by a brilliant man, Copernicus, who disguised the clues so he could hide a discovery from a powerful secret organization. Along the way, they'll find an unusual connections, people charged with helping and protecting them as they search for mysterious relics.

The book is designed for readers eight to twelve, but I'd recommend it to any readers who enjoy a riveting adventure story. Uncle Henry once wrote, "The sky is where mathematics and magic become one." Tony Abbott's The Forbidden Stone is where history and clues become one grand adventure.

This sounds fascinating. Thanks for the tip.
And the cover art is quite engaging.

I really enjoyed it, Libby. Just hate having to wait for the next one. Cliffhanger ending!

Lesa, I enjoy a good series more than anything. I especially like it if they are closely connected in a continuing format like the Harry Potter books with each having its own conclusion.