Scandal in Skibbereen by Sheila Connolly 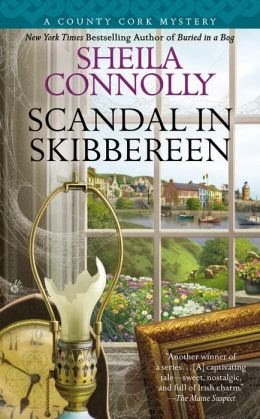 mystery. But, once you fall for Connolly's characters and the Irish beauty of the village of Leap, you might return for other reasons. She's right in saying other cozies are set in American small towns, but no one had captured the small towns of Ireland. Connolly's descriptions are enough to make anyone plan a trip to County Cork.

Maura Donovan has only been in Leap in County Cork for three months, but she already owns a house and Sullivan's Pub. She arrived in Ireland, not knowing what to expect. She certainly didn't expect a pushy American to show up in the pub, demanding that someone help her find a Van Dyke masterpiece that might or might not exist. In fact, if Maura hadn't stepped in, it's likely that no one would have helped Althea Melville. She certainly didn't help her own cause by her rude treatment of others. Once she learns that the Townsend family might own a lost Van Dyke portrait, she's determined to push her way into Mycroft House. It's only natural that Althea would be a suspect when a gardener is found murdered soon after she learns the estate's location. Althea is obnoxious enough that most people wouldn't care if she's the primary suspect. But, as a newcomer from America herself, Maura wants to teach Althea a lesson, while finding out who is behind the death of an innocent man. Maura's willing to join forces with an artist and the heir to the estate to dig into the past. Somewhere there may be a story about a portrait.

Scandal in Skibbereen captures the beauty of small towns in Ireland, the closeness of the community, the "invisible network that seemed to link everyone". Those links, though, often have traces of resentment. Memories are long, and the townspeople whose ancestors worked as servants in the manor sometimes view the residents of the manor as high and mighty, thinking they're better than others. Sheila Connolly brings those characters to life, and there's a great deal of promise of future growth in the stories of Maura Donovan and her friends and neighbors.

However, as much as I love the setting of Leap, and all of the regular characters, I do have a bone to pick with Connolly. Without giving anything away, I don't think she plays fair with the reader when it comes to the resolution. It's just a warning. Readers will forgive her once because of the richness of the setting and the wonderful people she creates. Scandal in Skibbereen comes alive with the charm and beauty of Ireland. But, charm only goes so far. A mystery author needs to resolve the story appropriately so readers won't complain. Just a reminder, for all the future County Cork mysteries I hope to read.

(And, don't forget I'm giving away a copy of Scandal in Skibbereen. See Monday's blog for details.
*****
FTC Full Disclosure - The publisher sent me a copy of the book, hoping I would review it.
Posted by Lesa at 4:00 AM

I really enjoyed Buried in a Bog, so have been patiently waiting for the Scandal! Will be curious about the end, now.

I'm still a Sheila Connolly fan, and a fan of the series. I'll just be curious about your reaction.