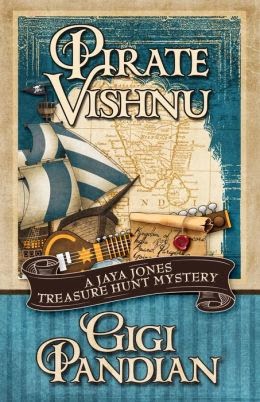 Jaya Jones really isn't "the worst Indian ever". She only lived in India until she was seven, and after her mother's death, she moved to California with her American father. But, she still respects her mother's family. Unfortunately, it's stories of that family that land her in trouble in Gigi Pandian's new Jaya Jones Treasure Hunt Mystery, Pirate Vishnu. How far would you go to uncover family secrets?

Jaya doesn't recognize the stranger who shows up at her door with a treasure map in hand. He insists her great-granduncle stole something from his grandfather, and that Jaya has family letters that would give them more details. But, that's not the family legend of Jaya's Uncle Anand who left India and died in the Great Earthquake of San Francisco in 1906 trying to save a friend. As a historian, Jones wants to find the truth. And, although she doesn't want to admit it, she really does thrive on danger and excitement.

Jaya intends to tell her best friend, Sanjay, about the treasure map and letters, but a break-up with the mysterious art historian Lane Peters and an evening performing on the Indian drums delay the story. It's a story that grows more complicated when Jones' afternoon visitor is murdered, and Jaya is mugged. That threat won't deter her from finding answers. "There's a missing treasure, incomplete information, inconsistent facts, an unsubstantiated accusation against Uncle Anand, and I've ended up with a Tamil treasure map." No matter what, Jaya is determined to find the answers to her family's secrets.

Missing Elizabeth Peters' Vicky Bliss? I've mentioned before that Jaya Jones reminds me of the best of the Vicky Bliss books. The fun mysteries are fascinating stories involving historians caught up in fast-paced adventures, and off-and-on romances with mysterious men. Pandian's books are filled with offbeat characters; Jaya's best friend, Sanjay, who is a magician, the unusual librarian, Jones' landlady. And, of course, there's the secretive Lane Peters.

Pirate Vishnu is an entertaining escapade, a mystery that travels from one exotic place to another, San Francisco to India and back, with pirates, treasure, the San Francisco Earthquake, and, of course, Jaya Jones.