India Black and the Gentleman Thief by Carol K. Carr

Carol K. Carr brings back the "Madam of Espionage" in the fourth caper novel in the series, India 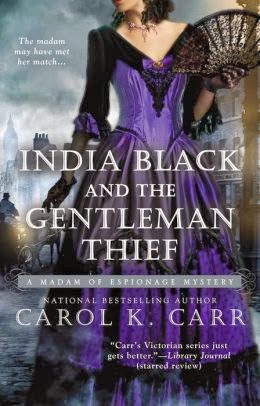 Black and the Gentleman Thief. It's another romp filled with interesting characters, and an unusual trio who work together to protect Queen Victoria's government.

India Black is the owner and madam at Lotus House, a high-class brothel in Victorian London. But, she has a secret role as a spy for Prime Minister Benjamin Disraeli. She was blackmailed into the role by a sexy spy, French, but she soon found out she has a knack for espionage. Together with a street urchin named Vincent, the trio takes on cases that reach from London to Scotland and anywhere else in the British Empire. This time, it's a case that starts right in India's house.

When one of India's clients, Colonel Mayhew, has an envelope dropped at her house, she's put out that he thinks of her house as a delivery point. But, she's more than put out when she and French are attacked by three thugs, and the envelope is stolen. They know the contents included a bill of lading, so she and French set off to find Mayhew. Instead, they find his body. Ignoring the police officer that suspects them, they end up at the docks looking for answers. They track down the shipping company listed on the bill of lading, but India isn't happy when they find the man behind the company. She once knew him as a gentleman thief. And, she's reluctant to turn in the man who stole a piece of her heart.

Filled with details of daily life in Victorian England, India Black and the Gentleman Thief is another romp through India Black's world. It's a historical mystery that offers traces of romance, and a great deal of humor provided by Vincent; the one woman who makes India cower, the Dowager Marchioness of Tullibardine; and India herself who acts as narrator. It's a step back in time to the days when a madam could be a spy for Her Majasty's empire.

*****
FTC Full Disclosure - I received this copy to review it for ReadertoReader.com

Love this series! Can't wait to read it.

Oh, good, Linda. It just makes me smile at times! I love Vincent!