Girl on the Golden Coin by Marci Jefferson

I originally asked for a copy of Marci Jefferson's debut novel, Girl on the Golden Coin, because 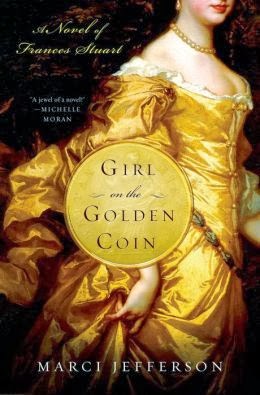 the author lives in Indiana. And, I agreed to participate in the book blog tour for the book. Once I read the book, I realized Jefferson needs to have her readers speak up for this book. The historical novel about Frances Stuart is a stunning debut introducing a woman few readers know about. In fact, this is probably the most readable historical novel set in England that I've read. The characters, and Charles II's court, live on the page.

Frances Stuart was part of the Stuart family in exile in France after the execution of Charles I of England and Cromwell's rise to power. The Restoration of Charles II to the throne in 1660 brought the Stuarts back to favor. Frances was a poor relative of Princess Henriette Anne Stuart, Charles II's sister, and she and her family were dependent on the good graces of the Princess and the Queen Mother. As much as Frances loved her cousin, Princess Henriette grew jealous when King Louis XIV attempted to seduce Frances.  After Frances refused the King, he, Henriette, and the Queen Mother forced her to go to England, insisting she attempt to seduce Charles, as they all had political games to play.

The dry facts do not do justice to this lively, emotional story of a beautiful woman caught up in the politics and hedonism of the Restoration Court in England. Frances Stuart tells her own story of the years in exile, the intrigue and seductions in both the French and English courts, and the man she came to love despite herself, Charles II. It's the story of a woman who was a pawn in the political games of two countries, but a woman who tried to be honorable, keeping a family secret that she didn't completely understand.

I found this novel more readable and less stiff than some of Philippa Gregory's books about the Tudors. If you're a fan of lush historical novels about the British rulers, you'll want to try Marci Jefferson's novel of the Stuarts, Girl on the Golden Coin. Step into the world of Frances Stuart, no longer remembered, but celebrated in her time, a woman so beautiful that kings fell in lust, and a country celebrated her beauty on its coins.

*****
FTC Full Disclosure - I requested this book from the publisher, and was then asked to participate in a book blog tour.