Around the World in 80 Dinners by Cheryl & Bill Jamison

When I picked up this book at the library and saw the subtitle it was hard to resist; Around the 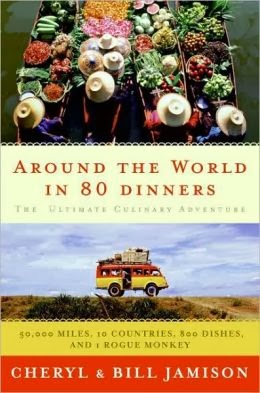 World in 80 Dinners: The Ultimate Culinary Adventure, 50,000 Miles, 10 Countries, 800 Dishes, and 1 Rogue Monkey. Cheryl and Bill Jamison are the authors of over a dozen cookbooks and travel guides. They are four-time James Beard Award-winning authors. They took both of their loves on a three month trip to taste food and see the world.

It took a great deal of shuffling of frequent flyer miles, and four years of planning, but in 2005 the couple managed to put together an exotic trip that took them from Bali to Australia, India to South Africa, France and Brazil, with stops in between. In each location they stayed in unusual hotels, and did their best to eat the native cuisine, although that didn't always work out. Thailand didn't do as well celebrating the local food as did India. In some countries, they had wonderful guides who led them to hidden restaurants. And, then there was that one monkey who caused trouble in the very first country.

The Jamisons had taken along Flat Stanley, a storybook character who is often photographed on trips. They planned to take pictures for their granddaughter, beginning with a picture with the monkeys in Bali. But, one monkey grabbed Flat Stanley, ripped him apart, and left the couple to piece together a mock-up for the rest of the trip.

But, the book really isn't about accidents. It's about the enjoyment of travel and food. I enjoyed the stories about the trip, but, not being a foodie, my eyes glazed over at times with the lists of food eaten. And, sometimes it really was just a list. In addition, because the book was written by both Cheryl and Bill Jamison, sometimes I found it difficult to read. Sometimes it said, "we", and other times it said Cheryl or Bill. I understand, and it makes sense. But, it just felt awkward at times.

Saying all of that, I'm still going to present this at a forthcoming book talk. The trip itself makes for fascinating reading, and foodies will appreciate the lists of exotic foods more than I did.