Spirit of Steamboat by Craig Johnson 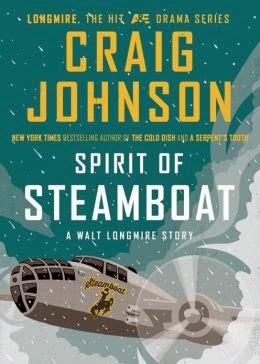 I've been looking back over the books I read in 2013, and, while there were a number of good ones, there weren't a large number of outstanding ones. Craig Johnson's Walt Longmire novella, Spirit of Steamboat, falls into the outstanding category.

On Christmas Eve, Sheriff Walt Longmire is in his office when a young woman walks in. Although she seems to know Walt, he doesn't recognize her. She also wants to see a picture of Lucian Connally, the former sheriff. Walt takes her to see Lucian in an assisted living facility. He's drunk, but aware enough to say he doesn't know her either. When she whispers the word, "Steamboat", the story takes an unusual turn to a Christmas past.

On Christmas Eve 1988, a car crashed, caught on fire, leaving three people dead and one survivor. But, the survivor wasn't going to make it unless Sheriff Longmire could find a way to get her to Denver in the middle of a blizzard. Sheriff Longmire, in his first term as sheriff, left his wife and daughter behind on Christmas Eve, and teamed up with defeated sheriff Lucian Connally to fight their way through a storm to try to save a life.

There's a little more on the book jacket, but I'm not going to spoil an outstanding story. In just 146 pages, Johnson manages to pay homage to the past, and bring back the youth and life of a few of his characters. This is a story of courage and character. In the acknowledgements, he says this is an odd little book. "It's not a mystery per se, but rather an adventure/thriller with mysterious elements; sometimes it's not so much about the suspense of killing characters off in a book, but rather, of trying to keep them alive." This "odd little book", Spirit of Steamboat, manages to bring characters to life and keep the reader turning pages. It's amazing that Craig Johnson can pack so much history, riveting story, atmosphere and adventure into one novella. But, then, he's a master of his craft with a gift of storytelling.

This holiday season, pick up Craig Johnson's latest Walt Longmire story, Spirit of Steamboat, as a gift to yourself or the Longmire lover in the family.

We just finished the audio version - nice respite during a long road trip . George Guidall always delivers a great Walt. And the story was great. Had us laughing and crying - and I appreciated the fact that we couldnlisten with an 8 year old in the car.

I'm so glad you enjoyed the audio, aehawkes.

Just catching up on your last few postings - I am reading Craig Johnson's Serpents Tooth and totally enjoying it. He really is a great storyteller. I also watched all of the Longmire's on television - I first heard about them from your blog - and can't wait for the new season to begin. I'll look for this one too. Hope you have a wonderful Christmas was your family!
Donna from CT

I'm so glad I was instrumental in you finding Craig Johnson and Longmire! He is a great storyteller. I think you'll like this one. Anyone who enjoys a good story would appreciate this, and you don't even have to be familiar with Walt and his stories.

What a wonderful review! Will add to my wish list and save my pennies for this one.

Fortunately, Karen, as a novella, it shouldn't be quite as many pennies!

I had meant to do this and just realized I had forgotten in my haste to do my review and a million other things. I now have a link on my review back to this review.

Oh, thank you, Kevin! And, thank you for the Christmas card. What a nice gift. I appreciate it.