Life in Half a Second by Matthew Michalewicz 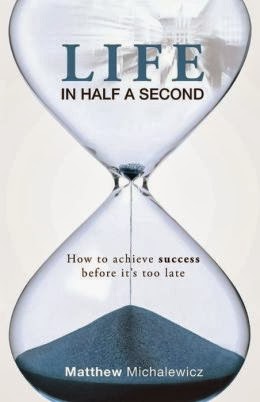 I know Matthew Michalewicz intended Life in Half a Second: How to Achieve Success Before It's Too Late to be an inspirational book. But, it can also make a reader uncomfortable. Using his formula, I probably have less than 8,260 days left to live. When you put your life in days left, it's a sobering figure. And, that's exactly what Michalewicz intended.

The author says in planet-time, our lives are only half a second. "The tragedy of life isn't that we only have half a second. The tragedy is that we waste it." Michalewicz says he's obsessed with one question. "What would you do if you only had one year to live?" So, he asks readers to measure their age in "days left" rather than "years lived". Would you change your life if you knew how few days you actually have left?

Michalewicz uses his own life to provide five doors to success in life. And, he says really all books about succeeding in life can be broken down into the same steps beginning with defining your goals, and working on them.

It's a sobering book, as I said. First, he asks readers to look at the days left. And, then he makes the reader wonder what would happen if you defined your life and goals more clearly. Well, darn. I'm going to admit that I haven't had a goal in life since I was twenty-two. My goal was always to be Director of my hometown library. What happens when you achieve your goal at such a young age? I've never found another goal. I wonder where I'd be or what I'd be doing if I had found something else I wanted in life as much as I wanted that job.

So, have you ever defined your goal? Have you reached it, or are you still working on it?

*****
FTC Full Disclosure - The author's publicist sent me a copy of the book, hoping I would review it.
Posted by Lesa at 4:00 AM

I would love to hear what others think.

It was an interesting book, and, as of today, I have a goal of going to Ireland in 2015, so I'm saving money, and going to start making plans.

that's excellent Lesa, I'm so happy to hear that!! I think a lot of people associate "goals" with business and career, but in my view some of the most important goals are personal ones (like spending more time with loved ones, seeing the world, being a better parent, etc.)

Hi Matthew. I listened to Chapter 1-4 of the book on the plane and it completely changed my life. I enjoyed the book so much that my journey felt shorter. Thank you for inspiring me. I can't wait to buy the book.
CHARITY FROM LUSAKA, ZAMBIA.

I am excited to always remember that I read this audio-book all through my flight.
It is a thrilling experience and am glad that it has taught me how to plan my life better.