The Thrill of the Haunt by E.J. Copperman 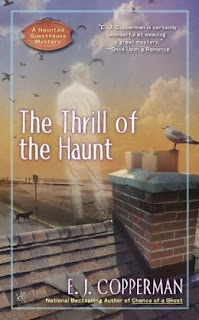 I get so caught up in E.J. Copperman's Haunted Guesthouse mysteries that I start to think of Alison Kerby as a real person. Can you respect and feel sorry for a character? Copperman birngs his characters to life, even in a series featuring ghosts. Alison Kerby is the type of person who would make an excellent friend.  Let's face it, though. Those of us who love cozy mysteries usually read for the characters. The latest in the series, The Thrill of the Haunt,  has some characters who are doozies, including the ghosts and familiar characters who surround Alison.

Alison Kerby owns a haunted guesthouse in Harbor Haven at the Jersey Shore where she lives with her eleven-year-old daughter, Melissa. Alison has made deals with the two ghosts who haunt it, Paul and Maxie. They appear and do shows for her guests who expect a haunted guesthouse. And, Alison, who has a private investigator's licence, will help Paul investigate cases.

Paul has been moping because they haven't investigated a case lately, and even the mercurial Maxie begs Alison to find a case. Alison is only a reluctant investigator, though. She sees her role as a mother to Melissa, and the owner of a guesthouse. But, two cases come to her, and she is manipulated into taking them. One involves the murder of Everett, a homeless man in town who died inside a locked men's room, stabbed to death. Then, she's pressured into following a suspected cheating husband. The two ghosts are happy, but Alison's life is deteriorating rapidly.

Here she is, having been coerced into working two cases, and, following a second murder, two strange cases. And, one group of women in town hired her, calling her the "ghost lady" accompanied by sneers in their voices. While one group of people accuse Alison of faking the ghosts for the publicity, she's afraid to admit to the new man in her life that she sees ghosts. And, she's on the verge of losing that relationship since he knows she's hiding something.

Pushy ghosts, unreliable clients, and a man to whom she can't tell the truth. Is is any wonder I feel sorry for Alison Kerby? While Copperman's mysteries are intriguing, his strength has always been his characters, and the world he creates for them. Welcome to Alison Kerby's world in The Thrill of the Haunt. She's a businesswoman running a guesthouse. She sees and talks to ghosts, investigates crimes, but, that's not how she sees herself. Unlike characters in many other mysteries, Alison is a realistic character, a woman who values family, dead and alive, and protects her daughter. She says, "That was my job - being a mother. Not investigating crimes." Whether it's investigating a case for ghosts, tracking cheating husbands, or looking to answers to a murder, Alison Kerby knows what's important in her life. Family comes first.

Pick up E.J. Copperman's books for the great covers or the ghosts. You'll return to the series because of the fun mysteries, the dry humor, and the great characters, led by Alison Kerby, her daughter, Melissa, and the ghosts, Paul and Maxie. It's hard not to feel sorry of Alison when she's manipulated so much by clients, friends and family. Once you've read The Thrill of the Haunt, though, you'll also respect her as a woman who is loyal and cares deeply for her friends. E.J. Copperman's mysteries create a world that welcomes cozy readers with great characters, wit, and kindness.

Quite the recommendation - must add to my wish list. I love it when the characters become 'real' to me!

I really like this series, Karen. If you can accept the ghosts, you might want to check it out.