Hollywood always seems larger than life, and the death of celebrities seem larger, too. Dina Di Mambro, a 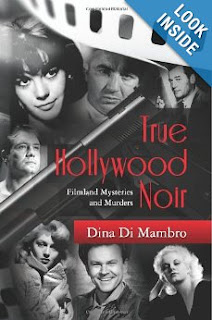 film historian and entertainment writer, takes a look at some of the memorable deaths there, covering almost eighty years of the twentieth century. The result is an intriguing book filled with black and white photographs, True Hollywood Noir: Filmland Mysteries and Murders.

Di Mambro's introduction sets the stage beautifully. 'Film Noir - translated from French as "black film" - is a genre that encompasses the elements of highly charged sexuality with cynical male characters, femme fatales, and moral ambiguity.' The author sees the deaths of a dozen celebrities in the same way, crimes that revolve around sex, money, and violence. In the early years, there were studio cover-ups, corrupt cops and attorneys, and bribery. "From 1922 until 2001, this book explores some of the most fascinating scandals, mysteries, and murders in Filmland history."

The book starts with the early years in Hollywood, and murder cases and deaths that were covered up by the studios. In fact, Di Mambro doesn't pretend to have the final answers. Instead, she summarizes the stories behind each death, quoting people involved and books that have already covered the tragedies. Then, she allows the reader to judge for himself or herself.

What really happened to Jean Harlow's husband? Did George Reeves, TV's Superman, really shoot himself? Were the deaths of Gig Young and his young bride actually a murder/suicide? And, it's fascinating to read about three deaths I remember, those of Bob Crane, Natalie Wood, and Robert Blake's wife.

If you're curious about Hollywood history, fascinated by the tragedies and crimes involving stars, True Hollywood Noir is a good starting point. Dina Di Mambro brings the victims and possible suspects to life through the accounts and the photographs. She opens the vaults to stories that Hollywood studios once tried to cover up in True Hollywood Noir: Filmland Mysteries and Murders.

I'm one of those 'inquiring minds want to know' type people and find that kind of history fascinating. Sounds good!

Oh, me, too, Karen. I find it fascinating, too.

I found Ms. Di Mambro's book to be an exciting read, particularly the Mickey Cohen chapter. I like that she strayed from the stereotypical portrayal of gangsters and, even more intriguing, taken from interviews from someone who actually knew him?! Great stuff, I loved it