The Sound and the Furry by Spencer Quinn 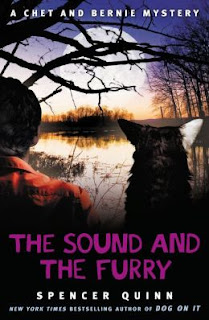 I'm a big fan of Chet, the dog in Spencer Quinn's Chet and Bernie mysteries. I totally agree with Stephen King that Quinn speaks dog fluently. Quinn takes his detecting pair out of Arizona, sending them to Louisiana for the latest mystery,  The Sound and the Furry.

Once again, Chet is the narrator. Bernie and Chet have an unusual client, Frenchie Boutettes, a prisoner they caught. When they run across Frenchie on a work crew, he asks them to find his missing brother in Louisiana, promising them three grand. After Frenchie's wife delivers the money, Bernie is surprised when a large detective agency offers him a high-paying job in Alaska. Bernie's too honorable, though, to dump a client, and refuses. Is that the reason a gang member shows up in Bernie's driveway? Just don't attack Bernie with Chet around. There's a reason Chet and Bernie are partners.

After a trip across country, the pair arrive in bayou country in Louisiana where they can't seem to find anyone to give them a straight story, even the family of the missing man. And, what's with the feud between the Boutettes and the Robideaus, a fight that goes back to the Civil War? Bernie doesn't know who to trust in this strange world, and even tells Chet, "We're in a madhouse."

It is a madhouse between feuds, birds covered in oil, a missing shrimp shipment, and gangs. In fact, the book is so filled with odd cast members and events that it seems to lack continuity. Even Chet becomes a little dull in this book. Usually, he's the comic relief as he loses the thread of their conversations and the case, dreaming of some dog activity, such as eating. However, this time, Chet seems to lose the thread of the case constantly, and it seems to be overkill.

I love Chet. However, The Sound and the Furry doesn't do him justice this time. The story drags on, and, unfortunately, drags Chet down with it.

I thought Chet was the star of this book, because of his encounter with the monster from the deep, that croc. As soon as Chet hit the waters of the bayou for a swim, I was expecting some drama such as that one. Sorry it didn't affect you the same way. By the way, I hate gators.

I'm glad you enjoyed it, Harvee. I did enjoy Chet's role in it. I'm afraid I found most of just boring.