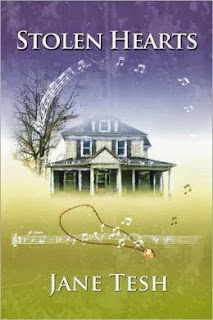 I'm a big fan of Poisoned Pen Press. The books they publish usually have an unusual slant. Somehow, I missed Jane Tesh's Grace Street series. The third one, Now You See It, is due out any day. But, like many other mystery readers, I like to start at the beginning of the series. Stolen Hearts, a mystery with  a wonderful cast of quirky characters, is the first of the Grace Street books.

Daniel Randall is struggling to go on with life after the tragic death of his daughter, Lindsey, in a car accident. His marriage ended, and his second marriage left him looking for a place to live at the same time he quit his job working for a detective agency. Daniel really is alone in the world except for his psychic friend, Camden. But, Camden and Daniel have always had a special connection, so it doesn't seem to be an accident when they end up in the same convenience store, and Camden invites him to move into his house on Grace Street in Parkland, North Carolina.

Things are looking up a little for Daniel, as Cam predicted. As soon as he moves in, he has his first client for his new detective agency. He's the sole employee, working out of Cam's house, but the request is better than his recent cases involving cheating spouses. His first client asks him to find a notebook that will prove her great-grandmother was a songwriter, and not just the girlfriend of a songwriter. Melanie wants to prove her ancestor wasn't a thief who then committed suicide. A second client wants him to find the gold heart-shaped locket that disappeared from her bedroom. Cases, an office in his temporary home. It's too bad that Daniel has a hard time appreciating what he has. He knows what he has lost.

This Grace Street mystery introduces the fascinating, quirky people who live at Cam's house, or revolve around his home. Those intriguing characters begin with Daniel and Cam, friends who are both trying to discover how to make a family and a home. Then there are the residents of Cam's house. I absolutely loved Angie, the newest arrival, a calm, outspoken woman. She's the one who summarizes the residents of 302 Grace Street. "What's really going on around here?...There's a beauty queen whose folks don't care where she is, an old man who looks like he's got mold growing on him, a little guy who sees things, and a struggling private detective who looks like some TV star."

Yes, Stolen Hearts involves mystery and murder. It's not a violent story though. Instead, it's a refreshing story with a cast that reminds me of the eccentric residents in the novels of Armistead Maupin. Stolen Hearts is a novel that beautifully combines melancholy and humor, and leaves a little hope that David and Camden may someday find happiness.

I'm fond of books that successfully combine humor and melancholy, and this one sounds good to me. I'm putting it on my list!

Hope your Sunday is a relaxing one, my friend!

Napping with the cats, and reading, Beth. Very relaxing day!