Mykonos After Midnight by Jeffrey Siger 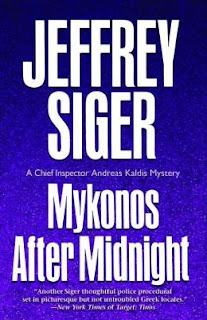 The death of a night club owner leaves a power vacuum on Mykonos, leading to an edge-of-the-seat cat and mouse game in Jeffrey Siger's Mykonos After Midnight. The fifth book in the Chief Inspector Andreas Kaldis series reunites Greece's Chief of the Special Crimes Division with old friend Chief Inspector Tassos Stamatos on the beautiful island, but it's a case that brings out all the worst of the country. It forces honest cops, Kaldis, and his assistant, Yianni Kouros, to fight the corruption and greed that could finally destroy them.

When Tassos investigates the murder of the night club owner, he finds a bombshell in a safe in the victim's house. In the wrong hands, it could bring down the wealthy and powerful all over Greece. He calls on Andreas, the man in charge of investigating matters of national concern or potential corruption. And, Tassos has in his possession documents that would definitely qualify as "national concern".  Both men know the killers are only the front for someone who has plans for the island. Neither of them realize how far the international crime ring reaches until their own lives and careers are in jeopardy.

Jeffrey Siger is a master at bringing Mykonos to life, showing the beauty and night life that attracts tourists. At the same time, his enthralling police novels reveal the political corruption and the financial problems in the troubled Greek country. Siger's mysteries are always intriguing. In this case, he cranks up the tension as Kaldis' steps are matched time and again by a wily opponent. Siger's knowledge of Greece, and his ability to keep the reader on the edge of the seat are two reasons to read these fascinating books.

Those of us who love well-rounded characters, though, will return time and again to learn more about Kaldis, his wife, Lila, Kaldis' shrewd secretary, Maggie, who happens to be Tassos' lover, Tassos, and Kouros. It's a cast that blends well together. And, don't think the police are the only powerful figures in this series. Siger's stories makes it clear he understands women can be manipulative and, in many cases, more powerful than the men who think they are in control.

Those who haven't read the series should start at the beginning to learn the stories of these characters, but Mykonos After Midnight really can stand alone. Jeffrey Siger knows Greece, and Mykonos, inside and out. It's a pleasure to read the latest book by the expert on Greek life and mystery.

*****
FTC Full Disclosure - The author had a copy of the book sent to me, hoping I would review it.

Read all of the books to date. Great series.

Isn't it terrific, Liz? I think it's a terrific series.

I haven't read any of this series yet, but it sure does sound like something I would enjoy. Let me see where I can squeeze it in the wish list!!

I totally get it, Karen! It's finding places for everything we want to read on a TBR pile or wish list!