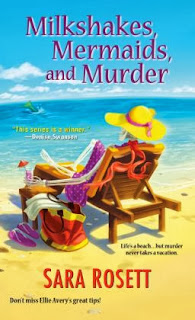 If you follow my blog regularly, you know I can't stand sleuths who are "Too Stupid to Live". Those are the characters, usually women, who risk their life, go out to meet a villain in the middle of the night without telling anyone, and, quite often keep secrets from the police. I've always respected Sara Rosett's Ellie Avery because she sometimes gets in trouble, but it's not because she's stupid. And, she does everything she can to protect her family. She might be out of her element, away from her husband and friends in the latest mystery,  Milkshakes, Mermaids, and Murder, but everything she does is to protect her family.

As Ellie Avery packs for the family trip to the Florida Gulf Coast beaches, she has two disappointments. Her husband, Mitch, is stuck in Canada, with a downed military plane, and the purse she ordered turns out to be the wrong one, a fake. Who would think the second  problem would blow up into a murder investigation? The seller, Angela, is from Florida, so she offers to run over  to Ellie's hotel with the right purse. But, Angela never shows up at the hotel. Ellie's brother, Ben, once dated Angela, and they both think it's odd she didn't show up after her phone call. When they find her cell phone, they decide to track her down. But, they arrive at her place just in time to find Angela's body in the pool. Even though Ben and Ellie are convinced Angela was murdered, the police don't believe it. And, when Ellie tries to turn over the purse as evidence, it's rejected as nothing important.

A simple knock-off purse leads to more trouble than Ellie could ever expect in Florida. But, when that purse puts her family in danger, Ellie takes action. Somehow, she'll protect her family and find out why that purse led to murder.

Sara Rosett's Milkshakes, Mermaids, and Murder takes readers to the beaches of Florida where celebrities frolic in nightclubs. But, as beautiful as the beaches are, the story focuses on Ellie. She's my kind of sleuth. She's as careful as she can be, while still searching for answers. And, there comes a point in the book where she realizes she was running around without a plan. At that point, she decides to apply her skills as a professional organizer to find a killer. Ellie Avery remains in character as the wife, mother, and organizer that she is.

Check out Ellie Avery's latest adventure in Milkshakes, Mermaids, and Murder. She's an ordinary woman caught up, once more, in extraordinary events

This sounds like a fun read, and I have to say the cover is hilarious. It made me laugh out loud!

I like this series, Beth. Ellie Avery is an Air Force wife, which doesn't have a lot of relevance to this book, so I didn't mention it again. I enjoy Rosett's handling of family life and sleuthing.