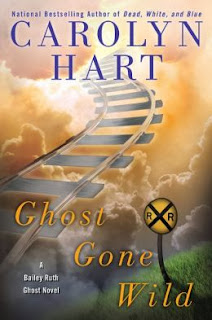 There are a number of otherworldly characters in mysteries nowadays, but I can't think of any spirits that narrate the stories themselves, except for Bailey Ruth Raeburn. Bailey Ruth died along with her husband, Bobby Mac, when their boat was lost in a storm in the Gulf. Now, she's a special emissary from Heaven's Department of Good Intentions, charged with lending a helping hand to someone on earth. Only Carolyn Hart could create this good-hearted spirit with a love of fashion. And, this time, Hart has Bailey Ruth hi-jacked in  Ghost Gone Wild.

When a woman on a black horse rides up, hands Bailey Ruth a ticket to the Rescue Express, and insists a young man needs help, Bailey Ruth assumes Wiggins, the stationmaster,  has a new assistant. It's only when Bailey Ruth saves an angry young man who was the target of a shooter, and finds she can't disappear, that she discovers something is wrong. It seems that Nick Magruder's Aunt Dee, Delilah Delahunt Duvall, knew her nephew was in trouble, but she couldn't violate the rules about interceding to help family. So, she hi-jacked Bailey Ruth, and without Wiggins's knowledge, sent her to Oklahoma to help her nephew.

Bailey Ruth is trapped on earth, with no money, no ID, and worst of all, in her opinion, no change of wardrobe. And, she's stuck with an angry young man who returned to his hometown to get revenge. But, someone is determined to cause trouble for Nick, and his long-running feud with a former high school enemy can only end up in tragedy. Bailey Ruth has to rely on her her own ingenuity, although sometimes Dee is a reluctant assistant. Nick may be obnoxious at times, but he doesn't deserve to be framed.

Carolyn Hart always finds new ways to surprise readers. If it isn't a ghost as a sleuth, it's another ghost riding  in on a black horse to try to save the day.  Ghost Gone Wild combines humor with an intriguing mystery. Why is someone out to get Nick Magruder, and who is the real killer? In this case, the humor adds so much to the story. Bailey Ruth and Dee bicker throughout the story; Bailey Ruth can't rely on Dee to be there, and they make an unlikely team. Despite her plans to send Bailey Ruth to earth, Dee is a stickler for the rules, Wiggins' Precepts for Earthly Visitations. Bailey Ruth can easily break three of the Precepts in her first twenty minutes on earth. And, then there's Bailey Ruth's preoccupation with her appearance and her wardrobe. She delights in the ability to change her wardrobe on a whim, and her inability to change her clothes is probably her biggest complaint about being earthbound. And, Bailey Ruth interacts with people on earth in ways that Wiggins' would never approve.

Looking for a mystery with a little romance, a suspenseful story, and great humor? If you don't mind an otherworldly sleuth, you won't go wrong with Carolyn Hart's Ghost Gone Wild.