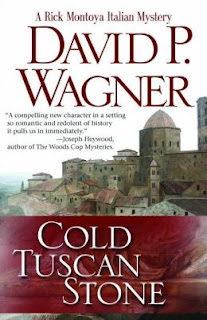 As a retired Service Officer who spent nine years in Milan and Rome, David P. Wagner brings his love and knowledge of Italy to his debut mystery,  Cold Tuscan Stone. His atmospheric story is filled with descriptions of Volterra, a city in Tuscany.

Rick Montoya's father was an American diplomat married to an Italian. With his love and knowledge of Italy, it was natural for Montoya to become a translator. And, he finally made the leap and moved to Italy from New Mexico. But, he was a little surprised when an old friend from high school contacted him. Beppo was now in the Ministry of Culture, and thought Rick's background was perfect for a job. Beppo wanted him to go undercover to Tuscany in the search for illegal sales of Etruscan antiquities. Since Rick had always been fascinated by the stories his Italian uncle, a police officer, told him, he agreed to work with the police.

Montoya arrived in Volterra with a list of three people to contact, and was told to check in with the police. But, he was only there one day when a man was found dead, and Rick was the last known person seen with him. Now, it seems everyone in Volterra knows Rick is an American translator who was the last one with the dead man. Even so, Montoya decides to go on with his visits to the suspects. However, he's a little naive, and doesn't realize what kind of danger he may be in as he agrees to meet with suspects. It's an undercover job that could wrong at any minute.

Cold Tuscan Stone is an atmospheric debut mystery, with the emphasis on the locale. Wagner wraps the history of the area into wonderful descriptions of Volterra. However, when it comes to character development, it's obvious this is a first novel. While Rick Montoya is likable, there is no depth to the characters, and the cast is extremely large and complicated for a debut mystery. All of the suspects, naturally, have Italian names, and similar occupations, so it wasn't easy to remember who they were. And, I didn't really understand what Rick saw in his demanding girlfriend. The characters do need some polish.

Despite its weakness when it comes to characters, Cold Tuscan Stone will appeal to those who enjoy atmospheric mysteries. And, it's only my opinion, but knowing that Poisoned Pen Press is the publisher is one more reason to have high expectations for the future. David P. Wagner's publisher is known for excellent mysteries, and I'm sure he'll be brought along as an author. So, try Cold Tuscan Stone now for the descriptions of Italy, knowing that the characters will probably develop in the future.

I hadn't heard of this one. Thanks!

You're welcome, Brenda. thanks for reading with me.

Thanks for the review, Lesa. It sounds interesting, but will probably sit on the TBR list for awhile before I can get to it.

Hmmm, Karen. I'm going to have to do a Foreign Mysteries Giveaway soon. I have a couple with exotic settings. But, not this week. I already have this week's ready to go.