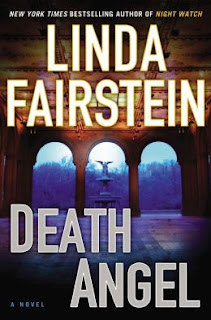 If someone said mystery, New York City, the city's history and geography, I'd say, "Who is Linda Fairstein?"In fifteen books, she's managed to capture the mystique of New York City while writing about a core group of characters that readers love to see involved in behind-the-scene stories that people seldom know. This time, Fairstein takes readers into the heart of the city, Central Park, in Death Angel.

The murder of a homeless or runaway girl would probably not make the news if it hadn't happened in the city's jewel, Central Park. But, Alexandra Cooper, the prosecutor in charge of the Special Victims Unit for Manhattan shows up when the body is found, not knowing if it was a sex crime. Coop likes to team up with two favorite officers, Mercer Williams and Mike Chapman. Mike's been assigned the case, but because of the high profile of the location, there's close scrutiny of the case.

At the same time, there's close scrutiny of the relationship between Chapman and Coop. It seems Chapman had a relationship with a woman who blames Coop for the break-up, and she's threatening to take her story to the media. It could become an enormous scandal for the city.

While Chapman faces a deadline on the scandal, the trio tackle a case that takes them through Central Park on the trail of a killer and a rapist, to shelters for the homeless, and a shelter for the super-rich, the Dakota. It's a story that manages to capture the history of a great landmark, while solving a contemporary murder and a cold case, cases that all lead back to Central Park

Anyone familiar with Linda Fairstein's series will welcome the return of three favorite characters in a mystery that combines a strong storyline with fascinating history. All of those elements combine to make every Fairstein novel unique while still having the appeal of familiar, well-loved characters. Fans of the series will appreciate the hint at a change in a relationship. And, for those who haven't yet discovered Linda Fairstein's world, Central Park is a wonderful place to start. Death Angel is a treat for those of us who love Fairstein and her city, as well as newcomers to the world of Alexandra Cooper, Mike Chapman and Mercer Williams.

No doubt your site is amazing and I really like it. Nice writing, you are doing great effort, your way of writing is unique. Love this site.

Lesa, I love the Alexandra Cooper series, even though I'm a book behind in reading them. Having lived most of my life in NYS, I thoroughly enjoy the history of NYC through these characters (they're such know-it-alls!). Great review.

I love Coop and Mike! I especially enjoy the Final
Jeopardy scenes and look forward to them in each book.

Due to disability, as much as possible, I read the audio versions of all my books. It seems that the same reader reads her audiobooks and Patricia Cornwell's. That sometimes gets confusing, because the characters who parallel in the different authors' books sound the same to me. The books are entirely different, so you wouldn't think it would be confusing, but I sometimes find myself confusing the characters—not the books—maybe sometimes.

I love Coop and Mike, too, Reine. You're really going to appreciate this one.

No, that sounds right that you might get characters confused with the same reader. Who knew?