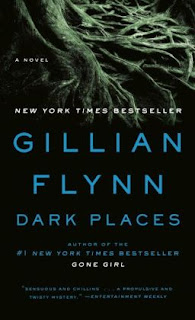 I don't think I'll ever be a Gillian Flynn fan. I read Dark Places for a workshop I'm attending this weekend. I read for character, and I have to say there are certainly some messed up people in this book. It was named one of the best books of 2009 by The New Yorker. And, I understand. It's well-written. But, I'd give this novel to fans of true crime before I'd give it to most of the mystery readers who read this blog. It's a novel that reads like true crime.

Libby Day was seven when her mother and two sisters were slain in a murder spree so violent it was referred to as Satanic Sacrifice. She was the one who testified against her fifteen-year-old brother, Ben. She hasn't spoken to him since, and hasn't answered his letters. But, she's now thirty-one, messed up, and almost broke. When someone from a group called The Kill Club approaches her, asking her to attend their meetings, she's a little suspicious. The group investigates old crimes, trying to find the "right" answer. They're convinced her brother, Ben, is innocent, and they want Libby to meet with him. They think Libby was coerced into saying she saw Ben commit the murders.

Libby is an unreliable narrator, too messed up to actually know the truth. She has been angry for years, and she's only willing to meet with Ben to get money from the Kill Club. But, the more she digs, the more she wonders what she really does know. "The murders had left me permanently off-kilter - in those kinds of judgment calls. I assumed everything bad in the world could happen because everything bad in the world already did happen."

I didn't find any likable characters in Dark Places, but that's because I read for character, looking for one character with appeal. None of these characters are attractive, including Libby Day. It's hard for me to read a book with so many emotionally sick people. And, it's extremely graphic in the details of the horrendous murders. Gillian Flynn's writing is too violent, and her characters too unlikable for my taste. I have to say, though, that it is well-written and intriguing, reminding me of Truman Capote's In Cold Blood. I'd recommend this book to true crime fans rather than mystery readers.

I haven't read this Lesa, but like you, I need at least one likeable character and a bit of humour, so I don't think I'll be rushing to buy this one.

I'm reading Dana Stabenow's 'Though not dead' at the moment, and although some of it's a bit bleak, she's such an excellent writer, and she does manage to inject humour into many scenes, so I'm enjoying it a lot. And I love Mutt, the half husky, half wolf!

There you go, Rosemary. I haven't found likable characters in either of the Gillian Flynn books I've read. She's just not for me.

Definitely not my kind of book either, Lesa, but I read it and while can't say I enjoyed it, I appreciated it. I thought she made a few of the characters compelling by the end, no small task. Dark Places is truly DARK. I read it because I was so impressed by Gone Girl. The characters in Gone Girl are a refined and charming lot by comparison. I'm awe-struck by Gillian Flynn's technical ability as a writer. That said, I doubt I can muster up the courage to read Sharp Objects, which I've heard is even darker.

Haven't read this one, but I really couldn't wait to get to the end of Gone Girl and wasn't really impressed.

The darkness just isn't for me.

I wasn't impressed either, Ricky. Since this was the second one I didn't like, although I can see they're well-written, I doubt that I'll read another one.

You think this is bad, you should read Flynn's other novel, SHARP OBJECTS. Again, no character is likable. But the main character is SO messed up!

I liked DARK PLACES more than GONE GIRL. At least DARK PLACES has an ending that doesn't leave you dangling.

Flynn has a definite style. That is, all three of her books grab your attention on page 1 and tell the story from different points of view while going back and forth in time.

I have no interest in Sharp Objects, Techeditor. Not to say Gillian Flynn isn't a good writer. She just doesn't write to my taste.

i have a problem enjoying a book with no likable characters. i need someone to be pulling for.

Me, too, Caite. I've quit more than one with no likable characters.