An Echo Through the Snow by Andrea Thalasinos 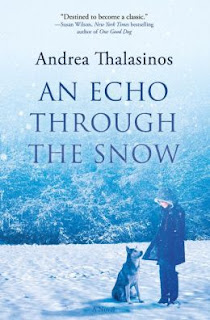 Last month, Andrea Thalasinos was a guest blogger here, talking about libraries. Her second book, Traveling Light, had recently been released. I had the chance to meet Thalasinos when I was in Madison,Wisconsin last week, when she talked about her debut novel, An Echo Through the Snow. It's the story of two countries, two Native peoples, and a shared love of Siberian huskies. And, it's the story of two women, seventy-three years apart, and their connected lives.

In 1929, in Siberia, Stalin was determined to destroy the Chukchi people and their culture, and he sent his Red Army to wipe out villages. While Teriem prepared to flee before the army, his wife, Jeaantaa, prepared to save her beloved huskies, the people's Guardians. If it meant sending one team across he Bering Strait with an American, she would send them. The Guardians represented the soul of the Chukchi people, and the dogs were more important than anything else in Jeaantaa's life.

Rosalie MacKenzie felt she was going nowhere in Bayfield, Wisconsin in 1992. Married to an abusive husband, she was a high school dropout. She was a true artist in beading, a prized skill in her Ojibwa culture. But, she felt as if she failed at everything else. It was only when she rescued an abused husky, Smokey, that she found a purpose in life. In order to rescue him, Rosalie was forced to rescue herself from the life she led. And, Smokey, along with another dog, led her to a couple who competed in races with their huskies. Rosalie, like another Native woman before her, was born to work with the dogs that became her own guardians.

There are uncomfortable parallels in this story between the Native Chukchi people and their treatment by Stalin's government, and the Native Americans and their treatment by the American government. In both cases, they were rounded up, sometimes killed, and forced to abandon their culture and assimilate. As the story goes back and forth between Terien's family and Rosalie's, it's easy to see the resemblance in the families torn apart, the alcoholism, the loss of livelihoods.

At the same time, this is a powerful story of two women whose lives grew to revolve around the huskies. The mystical connection that Rosalie feels, the dreams she experiences, are finally revealed to her in an unexpected meeting.

Thalasinos' novel is difficult to read at times, with the two timelines, and the tragedies in Siberia and Wisconsin. At the same time, it's beautiful, both in language and in the love of the dogs. An Echo Through the Snow is not only about two women and their love for the huskies. It's about a woman who gave everything to save the Guardians, while a Guardian showed up to save another woman years later. It's a powerful story of love, dogs, and growth. An Echo Through the Snow is a novel that will not easily be forgotten.

Once again you have introduced me to a new author---and this book sounds like an absolute must read for me.
Thanks.

Terrific book, Sue. I hope you enjoy it.

Glad to hear you liked the book as much as I did!!! Great meeting you at the workshop last weekend :)

I did like it, Trisha. It was great meeting you as well. Terrific workshop, wasn't it?

Good morning Trisha & Lesa! Great overview of the book, Lesa. I note that you left out the problematic issue of Dan from your critique, though. ;-)

Liz, I don't go too into depth in my reviews. I hate reviews that give too much away because then I don't even want to read the book. If I'd talked about Dan, I would have been too far into the book. (smile) I know my audience, and most of my readers are heading off to the library or bookstore to get a book if they like the review. They don't want the book spoiled.

If it hadn't been for Liz, Karen, I wouldn't have read it. It will make a nice addition to your wish list.