The Names of Our Tears by P.L. Gaus

It's not that I'm obsessed with Amish mysteries set in Ohio. It's just that P.L. Gaus and Linda Castillo 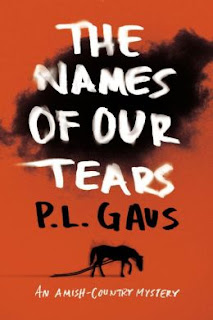 came out with books about the same time. There couldn't be a bigger difference in style, though. P.L. Gaus' The Names of Our Tears is a police procedural. Both have murders, but Castillo's books are more violent. However, both authors show that evil doesn't avoid the Amish.

Eighty-year-old Mervin Byler was just out for a morning buggy ride with a widow on his mind when he stumbled across a crime scene. He found an upset horse agitated over the body of an Amish girl. Byler's 911 call brought in Sheriff Bruce Robertson's team, a team that was puzzled first to find an Amish girl shot in the head, and equally surprised to find cocaine dumped in the pond on her family farm. When Robertson learned Ruth Zook had just returned from working as a waitress in Florida, his suspicions were aroused. After word of Ruth's murder swept through the Amish community, another young woman showed up to report that she had brought a suitcase back on the bus from Florida, just as Ruth had. Someone was using Amish girls as drug mules on a Florida to Ohio route. And Ruth's defiant act of dumping the cocaine in the pond opened up a hornet's nest for Robertson and his team.

Each of Gaus' mysteries bring together a trio of friends, Robertson, Pastor Cal Troyer, and Professor Mike Branden. At times, each of the men have been the focus of books. This time, it's Sheriff Robertson as he struggles to find answers to a crime wave and drug operation that stretches from Ohio to Florida's Gulf Coast. Police procedurals remain some of my favorite mysteries precisely because of the combination of methodical police work and shrewd experience. At the same time, Gaus is able to reveal the Amish way of life, and the different treatment needed to work with them on a murder case. While Robertson may sometimes employ unusual methods to get what he needs, he also uses his friend, Pastor Troyer, as a compassionate assistant. In this case, Troyer is employed to work with a young girl who only trusted the victim. Robertson needs all the clues he can gather in a frustrating case with witnesses who disappear, and links to crime thousands of miles away.

P.L. Gaus brings a deep knowledge of Amish culture to an absorbing story that could be all too real in The Names of Our Tears.

Well, you've hit another author I like. I too like the connections between the main characters as well as the Amish settings. When I'm done here, I'll buy and download this one.

I enjoyed the Linda Castillo book.

Thank you, Joe. I'm glad you enjoyed the Linda Castillo. And, you already know how different the two authors are. I really liked this one.

Oh, Lesa! I really didn't need another great series to get into!!! :)