Letters from Skye by Jessica Brockmole

Jessica Brockmole's debut novel, Letters from Skye, will undoubtedly receive some comparisons to The 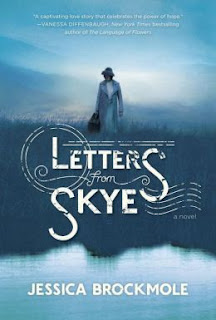 Guernsey Literary and Potato Peel Pie Society. In some ways, that's a shame. Letters from Skye deserves its own moment in the sun. This novel of star-crossed lovers is also a story of mother and daughter, family, and wartime romance. And, it's all told in the form of lovely letters full of poetry and longing. It's a novel that will tug at your heart.

Elspeth Dunn was a poet in her early twenties who had never left the Isle of Skye when she received her first fan letter in 1912. David Graham was an American college student, who, despite his restlessness and antics, had a love of literature and poetry. As they corresponded, they shared their deepest feelings, although Elspeth held back a little of her own story. When David volunteered to be an ambulance driver during the Great War, everything changed.

Twenty-eight years later, in 1940, Elspeth's daughter, Margaret, chases after a long-time friend, now a pilot in the Royal Air Force. When Elspeth and Margaret argue after a bomb explodes near their house, Elspeth disappears, leaving only a letter addressed to a mysterious "Sue". As Margaret writes to her beloved Paul, she tells the story of her search for answers to her mother's mysterious past. And, Elspeth's past unrolls in the form of her own love letters.

There's a book trailer for Letters from Skye on YouTube. Before I even saw it, I picked out the quote that summarizes this book for me. "A letter isn't always just a letter. Words on the page can drench the soul." This novel is a story of two souls, caught up in war and secrets. It's a story of longing, bittersweet loss, and heartache. Letters from Skye is beautifully written in the form of letters from two generations of lovers, caught up in war. And, it stands on its own as a solid debut novel by an author who couldn't have made a more promising start.

Very glad that you reviewed that one. I have been wondering whether or not to put it on my wish list.

My Mom struggled to get into it, but now she's loving it, Carol. I think you should put it on your wish list.

I'm reading the novel right now (the Catalan version, my English is not enough to enjoy in this language, unfortunately)and it's true that sometimes it remembers me "The Guersey Literary..." but only because of the war time and the island. I think "Letters from Skye" is more simple but touching. This pages are full of love, poetry, youth and it has a perfect rythm. The words flow...

I will recommend it.

Thank you for commenting. Your English is certainly excellent for commenting here. I'm so glad you found that the words flow and are beautiful. Thank you!