No Easy Answers by Carolyn Hart 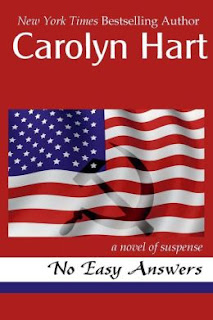 Oconee Spirit Press has been releasing Carolyn Hart's backlist. And, Memorial Day weekend is the perfect time to discuss a young adult novel she wrote in 1970, No Easy Answers. It's about a time period when there were no easy answers about patriotism, war and peace. It's a novel of suspense set in the Vietnam era.

Bart Hastings was born in a military family. Even though his father was a Colonel, in line to be promoted to Brigadier General, Bart wasn't sure he believed in war and military service after his brother was killed in Vietnam. In fact, he and Nancy, the general's daughter, were attacked in the middle of a peace march. But, the beating he received wasn't the worst thing that would happen to Bart that night. After arriving home and fighting with his mother about  the government's attempt to make Americans fear a Red Threat and Communism, he and his mother were horrified to find military police on the doorstep, saying the Colonel was under suspicion of selling a secret weapon to the enemy. Now, despite his dislike of the military, Bart was determined to do everything he could to prove his father was framed.

In a desperate search for the truth, Bart and Nancy hatched a plan to investigate the other men who could have been responsible for the theft. While searching for clues, Bart's conversations with a priest and the general help him realize he doesn't have all the answers to the state of the country. There are discussions of law and military service, issues that aren't just black and white. And, there's a young man as confused about Vietnam as others were then.

Carolyn Hart doesn't provide answers. She offers opinions on both sides in this riveting story of suspense and espionage. And, Bart Hastings comes to realize there really were No Easy Answers to the conflict the country was going through. But, it took good men to try to help the U.S. get through it, just as it was going to take a determined young man to find answers that would keep his father out of prison.

When NO EASY ANSWERS came out in 1970, I lived at the Naval Weapons Center, China Lake. I was for peace -- for getting out of Viet Nam. When I was at home I was surrounded by "hawks" who knew me as a protestor. When I was away at school I was surrounded by "doves" who knew me as the girl who lived at the Naval Weapons Center. I didn't know anyone else who seemed conflicted or confused about the war. I could have used Carolyn's book then. I didn't know about it. I hope that its rerelease will reach conflicted young adults today.

Reine, You must have had a rough time during Viet Nam. People weren't forgiving back then. In fact, I think people can be just as nasty now, so I agree with you. I hope it reaches the right audience.

Lesa, it's funny looking back now and recalling that I chose my college, UC Riverside, based on their commencement exercises the year before. When the Secretary of Defense spoke, students threw marshmallows at him. That seemed like a good campus for me.

That is an interesting way to pick a college, Reine!

I read the original printing in 6th grade as a class project (I believe it was credited to "C.E. Hart" back then). It was one of the first times in school where we got to read something that felt contemporary. I remember liking the book quite a lot and it encouraged me to read a lot more mysteries over the years. I still have my original copy boxed away somewhere so I'll have to dig it out for a re-read (which is probably not what the re-issuing publisher had in mind…)

Probably not at all, Tom, what the re-issuing publisher had in mind, but I bet Carolyn Hart would be very happy to know you still have a copy of the original book, and that it encouraged you to read more mysteries.

Hi Lesa - I tracked Carolyn Hart down through the wonders of the interwebs and sent her a brief note earlier this year (and got a nice reply). I think it's always a good idea to let an author (or anyone, really) know what their work has meant to you, even if many, many years have gone by.