Doctor Who FAQ by Dave Thompson 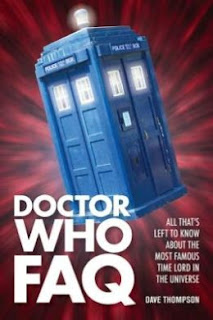 Anyone fairly new to Doctor Who television shows, as I am, would be very wise to pick up Dave Thompson's Doctor Who FAQ: All That's Left to Know about the Most Famous Time Lord in the Universe. However, don't pick it up if you haven't watched some episodes. The book makes much more sense if you do know a few of the Doctors and a few companions.

The book starts at the very beginning. Doctor Who debuted on Nov. 23, 1963 in Great Britain, the day after JFK was assassinated. If you're not familiar with the series, here's the premise. A man known only as the Doctor travels through time and space in a machine, the TARDIS, that is bigger on the inside than it is on the outside. And, over the fifty year span of the series, the actor who plays the Doctor has naturally changed. That is explained by saying that the Doctor regenerates into a new body as soon as his old one reaches the end of its life cycle.

Eleven men have played the Doctor so far. And, each Doctor has had his own personality. "No more or less than the companions who have traveled alongside him, the different Doctors are certainly not interchangeable, but neither are they utterly unique. Each has brought his own personality to the part, each has borne his own idiosyncrasies, and each has both his good points and his bad. But all remain the Doctor."

Thompson has compiled a fascinating resource for Doctor Who fans. It covers every embodiment of the Doctor, every companion that traveled with him in the course of fifty years, highlights of the series, and some of the lowlights. Other characters are covered, and, of course, many of the villains, particularly the Daleks. The book contains sections featuring the TV episodes guide, an audio guide, a guide to original fiction that featured the Doctor. It may be more than many readers want to read.

However, the true fan of Doctor Who will find Dave Thompson's Doctor Who FAQ to be a vital resource. And, I have to admit, I'm going to have a hard time returning it to the library on Monday. (Oh, and if you read this far and haven't seen Doctor Who, that's a TARDIS on the book cover, a "time and relation dimension in space".)