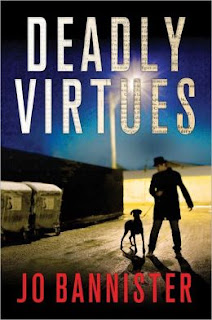 I usually review debut mysteries or a mystery in a series. So it will come as no surprise when I discuss a standalone mystery, and say I wish it was the kickoff to a series. Jo Bannister's Deadly Virtues introduces two remarkable characters who could easily carry a series set in a small British town.

Norbold was a small town, and, thanks to one man, Chief Superintendent John Fountain, its crime rate was regularly below the national average. Rookie Hazel Best was proud to join that team. Despite its reputation, though, one night went horribly wrong. Gideon Ash was brutally beaten by a group of teenagers, but refused to go to the hospital because he couldn't leave his dog, Patience. Hazel offered him a cell in the jail as a place to rest for the night, so someone could keep an eye on him. How would she ever guess that a terrified young black man would leave a strange message with the semi-conscious Ash? And, how would she ever guess that Barking Mad Barclay would get thrown into the same cell as the young man and beat him to death?

Gideon Ash had a past, so one one was likely to believe him when he reported his conversation with the dead man. But, Hazel learns enough to realize she and Ash are both in danger for reporting their suspicions. And, when another death occurs, she isn't sure who she can trust, other than the man everyone else considers to be a nut.

Gideon Ash is a tragic figure, a man who has suffered, but the reader only learns about his past after a third of the book. And, Helen Best is a woman with the courage and strength to stand up for what she believes. Together, these two loners are determined to find out the truth. They know they'll never bring back Jerome Cardy, the young man who died in jail, but they're determined to find justice for him.

My favorite mysteries include fascinating characters and the search for justice. Jo Bannister's Deadly Virtues is a perfect fit with Ash and Best, two complex characters caught up in an investigation that would have been dropped early by anyone less determined to find a killer. They make a deadly team.

(Oh, and a note for any who worry - Patience, the dog, survives.)

This sounds good and, I'll admit, you had my attention when you mentioned Gideon's concern for his dog. I'll definitely check this one out (and thanks for the info that Patience survives!)

I have friends, Jane, who would look at the cover of a mystery with a dog on it, and want to know if Patience was OK.