Chance of a Ghost by E.J. Copperman 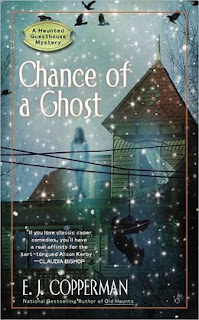 The premise of E.J. Copperman's Haunted Guesthouse mysteries is a little odd. Let's take a down-to-earth divorced woman with a ten-year-old daughter, give her a guesthouse at the Jersey Shore, and add two ghosts. It's almost too much for a leveled-headed woman to deal with. It takes an accident for Alison Kerby to see her resident ghosts, Paul and Maxie. But, it shocks her even more when she discovers her daughter, Melissa, and her mother can see the ghosts. Alison needs Paul and Maxie, though, and, in return, she earned her private investigator's license, and allows Paul to help her with cases. It's an uneasy partnership, but it becomes very personal in the latest book, Chance of a Ghost.

Alison is very handy at woodworking, plumbing, and anything having to do with house renovation, thanks to her father. And, ever since her father's death five years earlier, she's had disturbing dreams when he's within reach but disappears when she runs an errand. Since she can communicate and see ghosts, she's been trying to reach her father, with no avail. When her mother reveals that she's been seeing Alison's father since shortly after his death, Alison is angry. Why hasn't her father appeared to her or Melissa? But, when Alison's mother insists something is wrong, and her father disappeared, she wants her daughter to find him. In order to do so, she'll have to find a ghost's killer. Lawrence Laurentz swears he didn't die of a heart attack. Someone threw a toaster into his bathtub. And, he claims he can bring Alison's father back, but only if she finds out who killed Laurentz.

Convoluted? Yes. Alison questions it herself. "Was I going to tell them that one of the household ghosts had been annoying me with his insistence that we investigate the death of a man in a bathtub so I could find my deceased father, who was apparently being held against his will in some sort of bizarre posthumous blackmail scheme?" At the same time, this story is funny. The ghost of Maxie is always good for laughs. In this story, set in New Jersey as they prepare for a blizzard, the snow plow driver is a fun character. And, Copperman adds two guests as characters who fit perfectly into Alison's second job as a private investigator. In this case, though, it's also a poignant story.. What is more touching than a daughter trying to find her missing father?

In Copperman's hands, these elements all fit together beautifully. Once you accept the ghosts, it's easy to fall into the story of a woman trying to find her father while helping a dead man find a killer. Alison Kerby is a down-to-earth woman caught up in a world of ghosts that even she has a hard time accepting. And, she doesn't always handle her situation gracefully. She struggles to juggle her life as the owner of a guesthouse with the fumbling stories she has to tell as a private investigator working with, and often for ghosts. Alison's conversations with the ghosts are some of the funniest scenes in the book.

Yes, Copperman's books have an unusual premise. However, in Chance of a Ghost, as in his previous mysteries, he succeeds in sweeping the reader into Alison Kerby's world. Alison is an unwilling sleuth, trying to take care of the people she loves, her daughter and her mother. It's a frustrating world of fumbling investigation for an amateur sleuth. It's also an enjoyable escape for any reader wanting to laugh and sympathize with a woman who succeeds by working with unreliable ghosts.

Love your review. I love this family.

I have the feeling that I'd really enjoy this book (love the cover). Terrific review, Lesa! This is going on my list immediately.

I liked your review, too, Dru. It's a fun series. I think you all might want to try it!