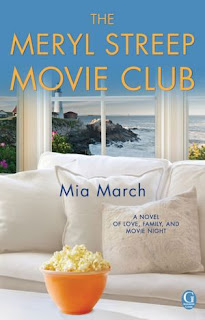 On Mia March's website, she says, "I love big-hearted, emotional novels about life and love." If you like those types of novels, you'll embrace her debut, The Meryl Streep Movie Club: A Novel of Love, Family, and Movie Night. And, if you're a Meryl Streep fan, you'll appreciate the discussion of ten of her films. This book is a treat for readers, filled with films, food, family, and hope.

Fifteen years earlier, on New Year's Eve, Lolly Weller woke her husband, and asked him to pick up her sister and brother-in-law, who had partied too much. She lived with that request for fifteen years following the accident that killed all three of them. She took in her two nieces, Isabel and June, and raised them with her own daughter, Kat, at her inn in Boothbay Harbor, Maine, The Three Captains' Inn. Now, Lolly asks all three of them to come home so she can announce she has stage four pancreatic cancer.

It's the perfect time for all of the women to come home. Isabel, who had loved her husband, Edward, since she was sixteen, wanted more from her marriage than Edward could offer. Then, she found him cheating on her. June lost her job in a Portland bookstore, but returned home to manage the Books Brothers store in Boothbay Harbor. As a single mother, a return home meant facing the women she went to school with, but it also meant her son, Charlie, had family around him. And, Kat, who had stayed at the inn with dreams of opening her own bakery some day, had always had her best friend, Oliver, for emotional support. But, now, when Oliver wanted more, Kat needed women to question her, to ask what her dreams actually were. And, Lolly needed to have the young women she loved around her as she made plans to pass on her legacy.

These four women had never been emotionally close, even when that accident threw them together. But, now, on movie night, Lolly's choices of Meryl Streep movies allow them to open up and reveal the fears, pains and uncertainties of their lives. As they discuss The Bridges of Madison County, Mamma Mia!, Kramer vs. Kramer, and other films, they find indicators as to how they want to live in the future. Streep's movies give them courage to change and leave the past behind. But, it's the bonds they finally form between each other that truly give them strength.

Mia March's debut novel is a triumphant story of family bonds. If movies have ever gotten you through rough times, or family has reached out to provide emotional support, you should appreciate this strong story. And, because I didn't want to let go of the characters, it's wonderful to know these characters will return as secondary characters, with the same inn setting, in March's next novel in 2013. I can't wait to read Finding Colin Firth. The Meryl Streep Movie Club is a satisfying, warm story. It's perfect for all of us who want "big-hearted, emotional novels about life and love".

Looking forward to reading this one - "satisfying, warm story" would be great for a cold damp autumn day.

It would be great for a cold, damp autumn day, Harvee. I liked the characters in this, and their story. As I said, can't wait to read the next one.

Your review has me hooked! Can't wait to read this one. Thanks, Lesa

Loved it, Karen! Can't wait to talk about it next week.

This sounds wonderful - and the cover makes me want to move into that house!

It was terrific, Ingrid. I hope you enjoy it! And, you can return to the inn next spring when the next book is out.

Sounds like a terrific book and probably not one that I would have been aware of. Thanks for the great review. It's on my book list and I'll be on the lookout for it.

I loved this book, Jane. I'm booktalking it this week. I hope you have a chance to read it!